The company launched toilet paper production a couple of weeks ago. It has been stressful. 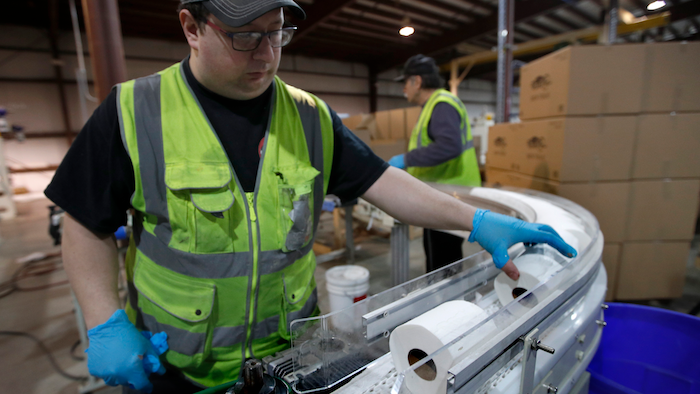 A worker guides toilet paper on a conveyor belt at the Tissue Plus factory, Wednesday, March 18, 2020, in Bangor, Maine. The new company has been unexpectedly busy because of the shortage of toilet paper brought on by hoarders concerned about the coronavirus.
AP Photo/Robert F. Bukaty

PORTLAND, Maine (AP) — There's no denying Tissue Plus is on a roll.

As luck would have it, the company launched production of toilet paper a couple of weeks ago — just as the reality of the coronavirus outbreak was starting to hit the U.S. Consumers began stocking up on the basic necessity in the event they had to isolate or quarantine at home for weeks.

“You could argue this is impeccable timing," President Marc Cooper said from the plant in Bangor, Maine. But in reality, he said, it's stressful because the company is inundated with frantic customers seeking to buy more toilet paper than the small factory can produce.

From Maine to Oregon, toilet paper producers are ramping up production and shipping operations to resupply stores wiped out by consumers buying toilet paper and paper towels in bulk. But the toilet paper is flying off the shelves as fast as stores can restock them.

Even shopping clubs like Costco and big box retailers like Walmart and Target that have enormous stocks were emptied of toilet paper and paper towels. Those stores are still getting shipments, but the shelves are emptied all over again as soon as they're restocked. In Maine, officials are investigating a convenience store accused of selling $10 rolls of toilet paper.

The numbers back up the reports from the field: Toilet paper sales nationally jumped about 213% in the week ending March 14, compared to the same period a year before, according to market research firm Nielsen.

The Great Toilet Paper Panic of 2020 was not confined to the United States. A video seen widely earlier this month from Australia showed three women brawling over toilet paper, underscoring the dire situation. 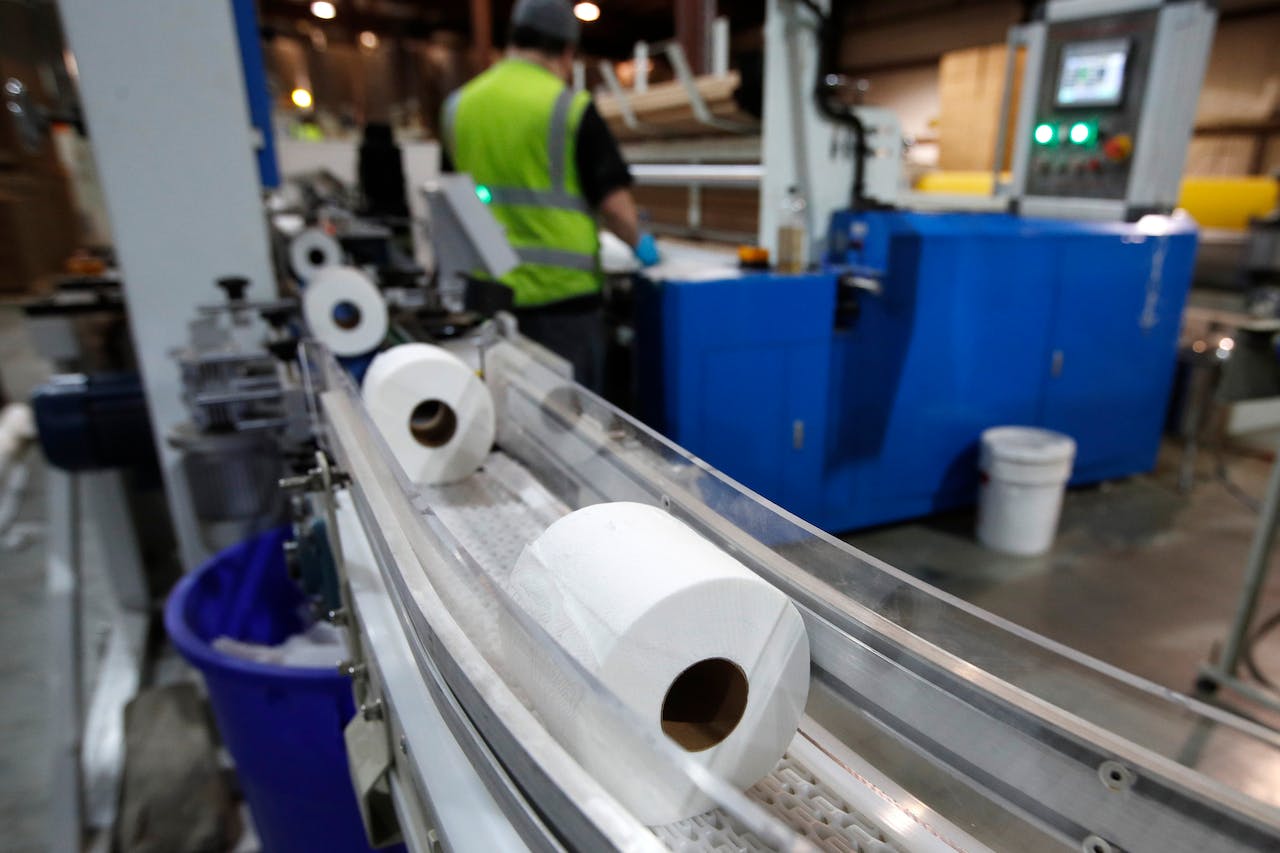 Toilet paper moves out from a cutting machine at the Tissue Plus factory, Wednesday, March 18, 2020, in Bangor, Maine. The new company has been unexpectedly busy because of the shortage of toilet paper brought on by hoarders concerned about the coronavirus.AP Photo/Robert F. Bukaty

“People are scared. When people are fearful, they’re going to resort to hoarding. People don’t want to be left without," shopper Jenilee Bryant said at a Walmart outside Portland, Maine, that was sold out of toilet paper. Thankfully, Bryant managed to secure a six-pack the day before at a drug store.

It's not just panic driving the demand: Americans are going to need more toilet paper in their homes because they're working remotely and children aren't going to school.

The industry estimates that would mean a 140% boost in toilet paper consumption in homes based on data from market research company IRI and the U.S. census, said Eric Abercrombie from Georgia-Pacific, maker of Quilted Northern and Angel Soft.

The good news is that most toilet paper sold in the U.S. is made at paper mills in North America. That'll make it easier to resupply stores while many foreign-made products suffer from delays and supply bottlenecks.

But the fear of shortages is bad enough that some folks are talking about using everything from paper towels to tissues to magazines in an emergency. Officials are worried that sewers and septic systems could get clogged if people start getting inventive.

In California, some communities are blaming several sewage spills on clogs caused by wipes and paper towels that shouldn't have been flushed.

And some Americans are showing an increased interest in bidets, popular in Europe and elsewhere, that use a squirt of water for post-potty hygiene.

Consumers should be happy to know that the toilet paper manufacturers are unflinching in the face of heavy demand. "We're working around the clock to make sure we can keep delivering products to the retailers as fast as possible,” Loren Fanroy, spokeswoman for Charmin, said from Procter & Gamble's headquarters in Cincinnati.

In Bangor, Cooper's company is not a fly-by-night operation that aims to cash in the situation. The plant has been in the works for a year, and the company bought the building in June, he said.

The company takes large rolls from mills and cuts it to size to be used as toilet paper, napkins, folded paper towels, and paper towel rolls, Cooper said.

“You hate to look at it as you’re capitalizing on the misfortune of our world circumstances. But I’m grateful that we can help in some way and that we can contribute and provide something that people need desperately,” he said.

Wiped Out of Toilet Paper?