The company is moving forward despite pending legal challenges. 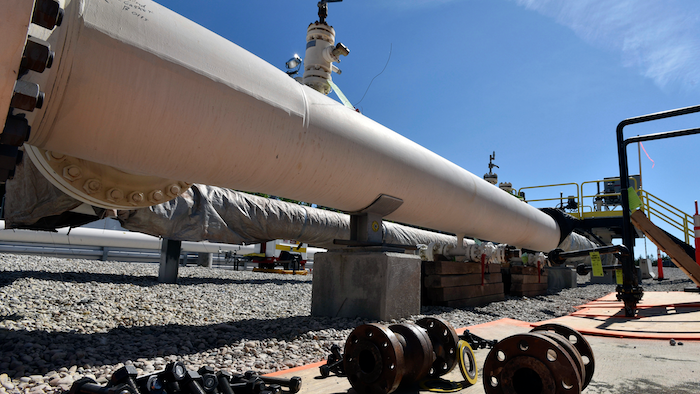 In this June 8, 2017, file photo, fresh nuts, bolts and fittings are ready to be added to the east leg of the pipeline near St. Ignace, Michigan.
Dale G. Young/Detroit News via AP, File

The Canadian company is forging ahead with plans to begin construction work next year on the tunnel, which would replace twin pipes that have lain across the bottom of the Straits of Mackinac in northern Michigan since 1953.

State Attorney General Dana Nessel is appealing a Michigan Court of Claims ruling last October that upheld an agreement between Enbridge and former Republican Gov. Rick Snyder's administration to drill the tunnel through bedrock beneath the straits. The case is before the state Court of Appeals, which declined to put the lower court ruling on hold while considering the matter.

“We feel like it's time now for Enbridge and the state to work together and keep the project moving," he said.

Enbridge, based in Calgary, Alberta, planned Friday to provide a status report to the Mackinac Straits Corridor Authority during a meeting in St. Ignace, Michigan. The panel was established by the law that approved the tunnel agreement.

Great Lakes Tunnel Constructors, a partnership between Jay Dee Contractors Inc. of Livonia, Michigan, and the U.S. affiliate of Japan-based Obayashi Corp., will build the tunnel. Arup, a multinational engineering company based in London, will design it, Enbridge said in a statement.

Line 5 each day carries 23 million gallons (87 million liters) of crude oil and natural gas liquids used for propane between Superior, Wisconsin, and Sarnia, Ontario. A roughly 4-mile (6.4-kilometer) segment divides into two pipes that run beneath the Straits of Mackinac.

Environmental groups want the line decommissioned, contending the underwater pipes are aging and vulnerable to a rupture that could do catastrophic damage to the lakes and their shorelines. Enbridge says they're in good condition and sustained only minor damage from a tugboat anchor strike in 2018.

For Love of Water, an advocacy group, urged the corridor authority to halt further work on the tunnel plan. The Traverse City-based organization argued that Enbridge had failed to seek authorization for the project through the Great Lakes Submerged Lands Act as required under a common-law doctrine that holds navigable waters and soils beneath them in trust for public uses.

Bypassing those laws is "one of the most egregious attacks on citizens' rights and sovereign public trust interest in the Great Lakes in the history of the state of Michigan," said Jim Olson, the group's president.

Duffy said Enbridge will seek construction permits from the Michigan Department of Environment, Great Lakes and Energy and the U.S. Army Corps of Engineers.

The Michigan Propane Gas Association, which favors the tunnel project, said it would “guarantee Michigan residents will have the propane they need throughout the state for generations to come.” Opponents said there are ways to distribute propane without continued operation of Line 5.