CEO Walks Back Pledge to Fix Homes Damaged in Explosion

He says it's premature to make any decisions. 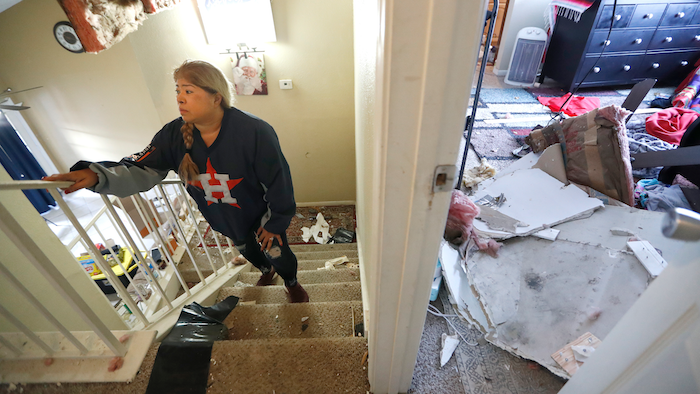 Maria Hernandez climbs her stairwell as she and her family worked to move their belongings out as they sifted through their damaged home in the Bridgeland Lane area of Houston, Sunday, Jan. 26, 2020, after the Watson Grinding Manufacturing explosion early Friday morning. Her ceiling, right, collapsed even further after overnight rains.
Karen Warren/Houston Chronicle via AP

HOUSTON (AP) — The head of a company involved in a massive explosion in Houston that killed two workers and injured 20 others on Tuesday backtracked on a pledge he had made earlier in the day to fix the hundreds of structures damaged by the blast.

John Watson, who is the CEO of Watson Grinding and Manufacturing, had told KTRK-TV on Tuesday, “I will repair all the damaged homes ... My insurance company will.”

City officials say 450 structures, mostly homes, were damaged after the explosion early Friday at a warehouse at Watson Grinding and Manufacturing. Most of the homes, 358, had minor damage. But 35 had major damage.

However, later Tuesday, Watson issued a statement taking back his earlier comments, saying, “At this point, it is premature for the insurers to make any decisions with regard to payment from this tragic incident.”

“To correct comments I made earlier today, no claims process has been established at this time. Who is at fault and who will pay for damages cannot be determined at this early stage,” Watson said.

Robert Kwok, an attorney representing 120 people whose homes, businesses and apartments were damaged by the blast, said he’s disappointed Watson walked back his pledge.

“We were ready to go to the table and make a deal with Mr. Watson. It looks like we’re in for a fight,” Kwok said.

While some of his clients have insurance, Kwok said others do not.

“These folks are in a bad spot. They need Mr. Watson to come and do the right thing as he previously promised,” he said.

Of the 120 people he represents, Kwok said up to 50 have been displaced from their homes and are living with relatives, friends or in temporary housing.

The American Red Cross is operating a recovery service center at a church and connecting residents with community resources.

Dozens of volunteers helped residents this past weekend with clean up and repairs.

“At Mayor (Sylvester) Turner’s direction, city representatives are in talks with nonprofit groups to see how we can partner to help those who don’t have insurance or any other means to quickly recover,” said Mary Benton, a spokeswoman for the mayor.

Officials are asking residents whose homes were damaged to call the city’s 311 request line. Benton said most of the calls have been about immediate short or long-term housing needs.

Since Friday’s explosion, 10 lawsuits have been filed against the company, including a wrongful death suit by Flores’ family.

The cause of the explosion is still being investigated.

“A complete investigation is essential to determine the cause and identify potentially responsible parties,” Watson said.

Elon Musk has said the company found chips from other suppliers, then scrambled to rewrite its software.
Oct 21st, 2021
Follow Us
Most Recent