Trump's Rust Belt Revival is Fading. Will it Matter in 2020?

A year away from Election Day, President Trump's promised coal and steel renaissance is not materializing. 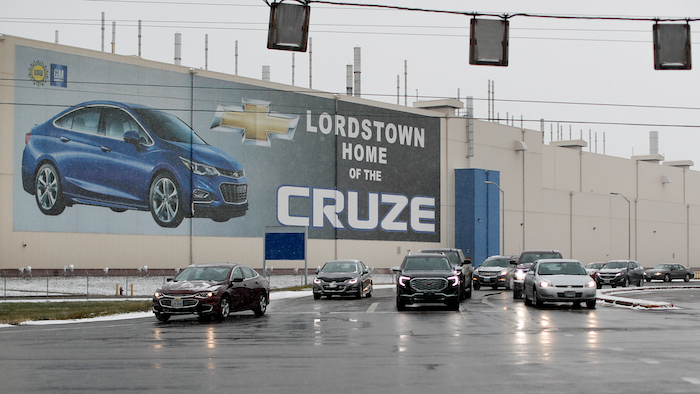 In this Nov. 27, 2018 file photo, a banner depicting the Chevrolet Cruze model vehicle is displayed at the General Motors' Lordstown plant in Lordstown, Ohio. An economic renaissance in the industrial Midwest promised by President Donald Trump has suffered in recent weeks in ways that could be problematic for Trump's 2020 re-election.
AP Photo/John Minchillo, File

TOLEDO, Ohio (AP) — President Donald Trump once promised that coal and steel would be the beating heart of a revived U.S. economy — a nostalgic vision that helped carry him to victory three years ago in the industrial Midwest.

But a year away from Election Day, that promised renaissance is not materializing and both sectors are faltering in ways that are painfully familiar and politically significant.

Recent data shows manufacturing jobs are disappearing across Pennsylvania, Michigan and Ohio, states critical to Trump's reelection chances. On Tuesday, Murray Energy, a major mining firm with close ties to the president, became the latest of many coal companies to file for bankruptcy this year, rattling communities across Ohio, West Virginia and Kentucky. The news followed recent layoffs at a prominent steel manufacturer in northeastern Ohio and General Motors' final decision this fall to shutter its massive plant at Lordstown, Ohio.

The turmoil in the manufacturing and mining sectors threatens to undermine Trump's claim to a booming economy — the bedrock of his and his Republican allies' campaign strategy — in places where it matters most. While Trump's economy is benefiting high-tech manufacturing and energy sectors in other regions, the manufacturing slump across the Rust Belt may test whether Trump can retain his appeal to blue-collar workers without having fully delivered on his promise to fatten their bank accounts.

"I don't think that Ohio is just a lock in the Republican's column, nor do I think that blue-collar voters are settled on who they're likely to select," said Robert Alexander, a political scientist at Ohio Northern University. "There is a lot of economic angst still in the state."

Recent elections haven't shown that angst to be aimed at Republicans. After Trump won Ohio by 8 percentage points — the largest margin of any presidential candidate since 1988 — Republicans fared better in Ohio than in many other states in last year's midterms, nabbing every statewide office but one. Their winning formula was based on overwhelming support from working-class, white voters in small communities where a single company can anchor the local economy. 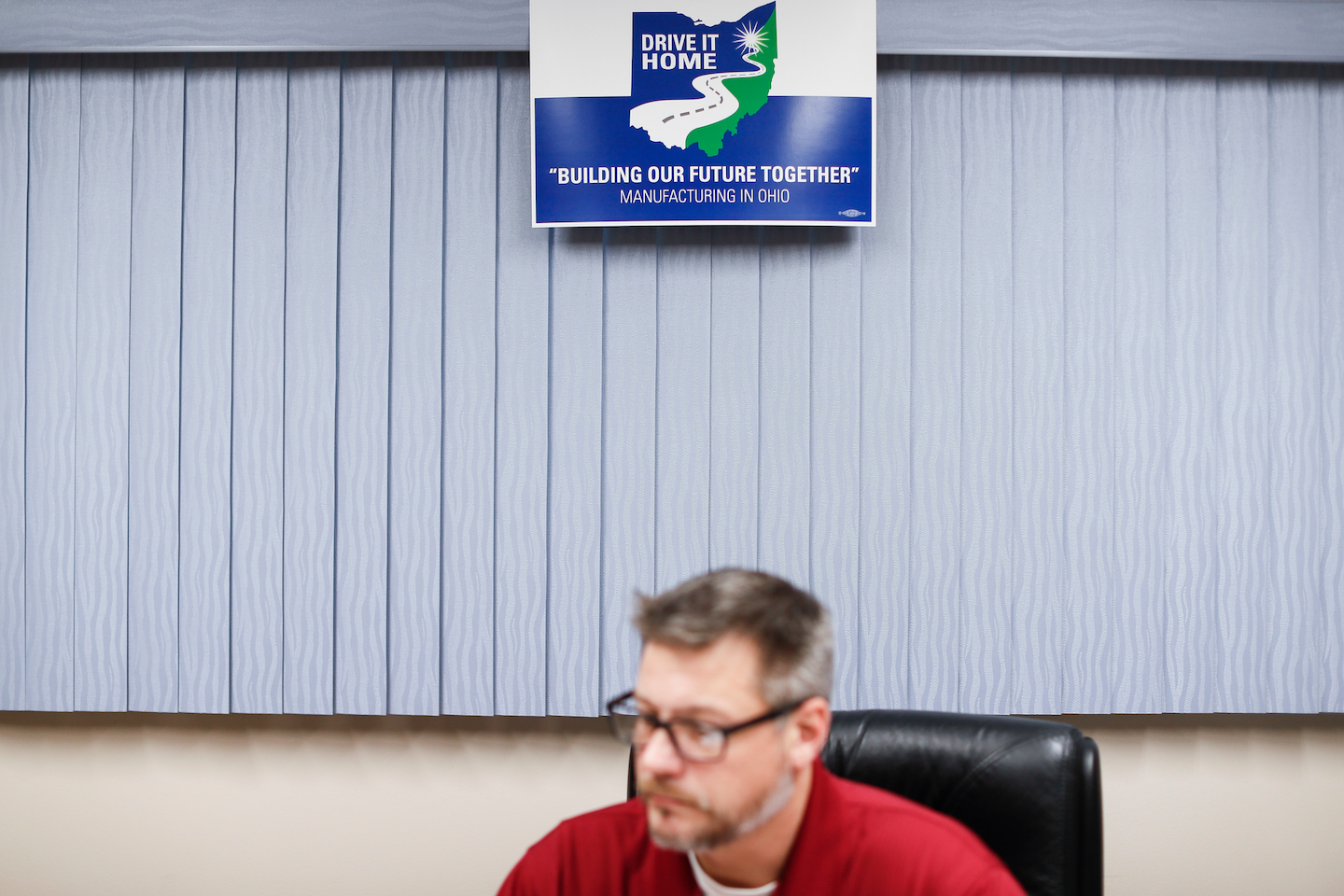 In this Nov. 27, 2018 file photo, David Green, president of Local UAW 1112, speaks in his office nearby the General Motors' Lordstown plant in Warren, Ohio. An economic renaissance in the industrial Midwest promised by President Donald Trump has suffered in recent weeks in ways that could be problematic for Trump's 2020 re-election.AP Photo/John Minchillo, FileMurray Energy is based in St. Clairsville, Ohio, a small city near the West Virginia and Pennsylvania borders in a county that voted for Trump over Democrat Hillary Clinton by a margin of 40 percentage points. But the company's footprint is far larger, including 17 mines across Alabama, Illinois, Indiana, Kentucky, Pennsylvania, Utah and West Virginia, as well as Colombia, South America.

The company's former CEO Bob Murray is a Trump donor and advocate for his company's interests. Murray openly pressured Trump to issue an emergency order that would have exempted his struggling company from environmental regulations he said were burdensome. Trump flirted with that idea but never approved it.

Murray said Tuesday the company was filing for Chapter 11 bankruptcy, a restructuring that puts at risk the incomes, pensions and health care benefits of roughly 7,000 workers.

Democratic presidential candidate Elizabeth Warren, a bankruptcy expert, seized on the news as evidence of Trump failing his voters.

Trump bounded into office promising to bring back "beautiful clean coal" and deliver a victory for every factory worker. The message helped him pull out victories in Michigan, Pennsylvania, Wisconsin and Ohio, where scars from the Great Recession that technically ended in 2009 were still fresh.

For the first two years of his presidency, Trump oversaw an economic recovery that extended across sectors and regions — adding manufacturing and factory jobs in the Rust Belt and beyond.

But recent signs show that trajectory shifting downward quickly, fueled by a slumping global economy and the trade wars escalated by the Trump administration.

So far this year, Ohio has shed 2,400 factory jobs. Michigan has lost 6,200. Pennsylvania has 9,100 fewer manufacturing workers. West Virginia employers have cut 400 mining jobs. And Kentucky has let go of 600 mine workers.

General Motors struck a devastating blow to Ohio by ending more than 50 years of car manufacturing at assembly plant near Youngstown, a labor stronghold where Trump surprised Democrats by winning half the vote in 2016. But for every GM-scale closure, there are other, lower-profile layoffs in other states.

Nearly 950 manufacturing jobs in Pennsylvania were lost in May when the cabinetmaker Wood-Mode shuttered. Bimbo Bakeries closed a plant in July in northern Pennsylvania that cost 151 jobs, according to filings with the state.

Earlier this month, Canton, Ohio-based Timken Steel ousted CEO Tim Timken, also a Republican donor, as the company's stock has plummeted over the past year.

Timken received $4 million in cash as severance. The company eliminated 55 positions in July in order to save $7 million annually next fiscal year, according to filings with the Securities and Exchange Commission.

Separately, roughly 250 Timken Steel employees so far have received extended layoff notices, said Bob Harper, president of United Steelworkers 1123. Factories have been idled at times due to a lack of orders.

Each job at Timken Steel supports about five other jobs in the community, said Harper, who says he thinks the layoffs could turn voters there against Trump.

It's far from clear that Ohioans are poised to blame Trump for the economic blows.

In Ohio, Dan Wade has worked at Timken Steel for the past 19 years. He was temporarily laid off last week, but says he expects to go back in a few days. He blames the company's troubles on management, not Trump.

Timken retiree Joe Hoagland, who didn't vote Trump and won't in 2020, said he sees no evidence that Trump has been a boon for manufacturing.

"I don't see any revitalization," Hoagland said. "When you talk about bringing employment back, you can't just all of a sudden make the happen."