Court Denies Attempts to Stop Opioid Trial Before it Begins

The trial for Ohio's Summit and Cuyahoga counties is a closely watched bellwether that could lead to settlements of the suits. 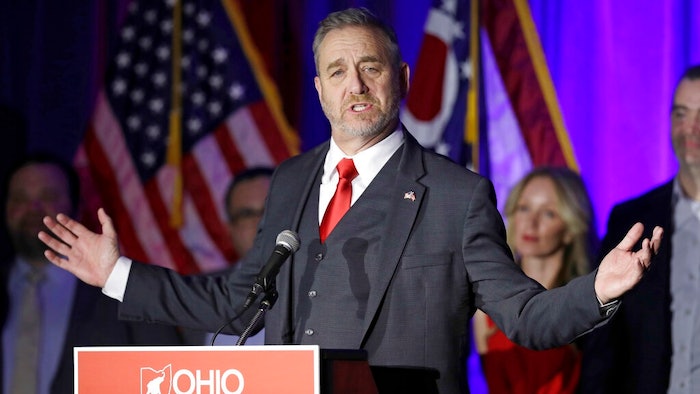 In a Nov. 6, 2018 file photo, Dave Yost speaks at the Ohio Republican Party event, in Columbus, Ohio. A federal appeals court has denied an effort by state attorneys general to stop a bellwether opioids trial involving two Ohio counties from getting underway later this month in Cleveland. The Sixth Circuit U.S. Court of Appeals in Cincinnati ruled Thursday, Oct. 10, 2019 that Ohio didn’t object when lawsuits filed by Summit and Cuyahoga counties were initially included in what has become a sprawling case involving around 2,600 local governments and other entities. Yost argued in August against the certification of the local government lawsuits as multi-district litigation.
AP Photo/Tony Dejak, File

CLEVELAND (AP) — A federal appeals court on Thursday denied two efforts that could have kept the first federal trial on the opioids crisis from starting as scheduled this month in Cleveland.

The rulings clear the way for the trial to start Oct. 21 involving just two of the more than 2,000 local governments and other entities that have sued companies that make, distribute and sell prescription opioids.

The trial for Ohio's Summit and Cuyahoga counties is a closely watched bellwether that could lead to settlements of the suits.

One effort from Ohio Attorney General Dave Yost had argued that the trial should not move ahead because states, not local governments, have the sole authority to file such lawsuits on behalf of their citizens. Several other states supported Yost's request.

A three-judge panel from the Cincinnati-based 6th U.S. Circuit Court of Appeals noted that trial preparations have been made already and that Ohio did not object when counties in the state began making claims against the drug industry.

"In view of these circumstances, we decline to exercise our discretion to deploy 'one of the most potent weapons in the judicial arsenal,'" the judges wrote, paraphrasing previous case law.

Yost reacted in a news released noting that the 6th Circuit did not say that Ohio's argument was incorrect or invalid, but that the trial court in Cleveland should address the issue.

The state is reviewing its options, he said.

A ruling from a separate 6th Circuit panel rejected the argument from defendants that U.S. District Judge Dan Polster should recuse himself from the trial because of prejudice against the defendants in comments in court and to reporters.

"But we must take his statements in context. Judge Polster equally placed blame on all parties, readily acknowledged that settlement efforts might not work, and acknowledged that both sides had compelling arguments," the panel said.

Opioids, a category of drugs that includes prescription versions and illegal drugs such as heroin — have been linked to more than 400,000 deaths in the U.S. since 2000. Ohio has been one of the hardest-hit states.