The lawsuit says Boeing misled pilots and airlines by not telling them about a new flight-control system that is now at the center of investigations into the accidents. 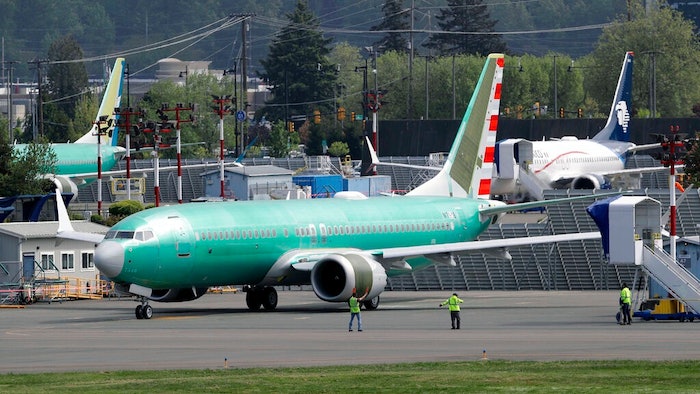 In this Wednesday, May 8, 2019 file photo, workers stand near a Boeing 737 MAX 8 jetliner being built for American Airlines prior to a test flight in Renton, Wash. The union representing Southwest Airlines pilots is suing Boeing and calling the grounded 737 Max unsafe. The Southwest Airlines Pilots Association said on Monday, Oct. 7, 2019 it filed a lawsuit against Boeing that Boeing rushed the plane into service and misled pilots by saying it was little different than previous versions of the 737. The union says those claims turned out to be false.
AP Photo/Ted S. Warren, File

DALLAS (AP) — The union representing Southwest Airlines pilots is suing Boeing, saying its pilots are losing money because the company rushed an unsafe plane into service only to have the 737 Max grounded after two deadly crashes.

The Southwest Airlines Pilots Association said in the lawsuit filed Monday that Boeing misled pilots and airlines by not telling them about a new flight-control system called MCAS that is now at the center of investigations into the accidents.

The lawsuit, filed in a Texas state court in Dallas, could make it harder for Boeing to gain public confidence in the plane. Chicago-based Boeing hopes to use pilots in a campaign to reassure travelers once regulators approve changes that the company is making to the plane.

"We believe this lawsuit is meritless and will vigorously defend against it," Boeing responded, in a statement from spokesman Charles Bickers. "We will continue to work with Southwest Airlines and its pilots on efforts to safely return the Max to service."

Southwest had more Max jets than any airline when the plane was grounded in March. The union said the grounding has eliminated more than 30,000 Southwest flights.

The president of the pilots' union said in an interview that the lawsuit followed failed negotiations with Boeing over compensation for more than $100 million in income that pilots have lost due to canceled flights. Also at issue were the union's expenses to comply with a subpoena from the Justice Department, which is conducting a criminal investigation into Boeing's representations to regulators who certified the plane.

The union leader, Jon Weaks, said he believes Boeing will make the plane safe and pilots will resume flying it.

"When the plane comes back, it will be one of the most examined airplanes ever," he said. "The problems they had with MCAS are being engineered out of it."

The lawsuit, however, uses harsh language in condemning Boeing for what it told airlines and pilots about the Max, which went into service in 2017. Boeing sold the plane as a more fuel-efficient but otherwise lightly modified version of the 737, which has flown since the 1960s.

"Those representations proved to be false," the union says in its lawsuit. "The 737 MAX now is grounded worldwide because it is unsafe, unairworthy, and contrary to Boeing's representations, distinct from the 737 family of aircraft that preceded it, which SWAPA pilots have flown for years."

Before both crashes, MCAS was activated by faulty sensor readings and pushed the planes' noses down. The union charged that Boeing abandoned good design practices and withheld key safety information from regulators in its rush to get the plane on the market.

The lawsuit cited news accounts for many of its claims. Investigations have not been completed into crashes in Indonesia and Ethiopia that killed 346 people.

Boeing faces dozens of lawsuits filed by passengers' families and has settled a few for undisclosed terms. In July, it announced a $4.9 billion after-tax charge to cover compensation it expects to pay airlines in coming years to cover canceled flights.

Boeing expects the Max to fly again this year. Southwest dropped the plane from its schedule through Jan. 5, and Weaks said he doesn't expect it back until February or March.