Minor issues are largely resolved, and both sides will now try to agree on other contentious matters. 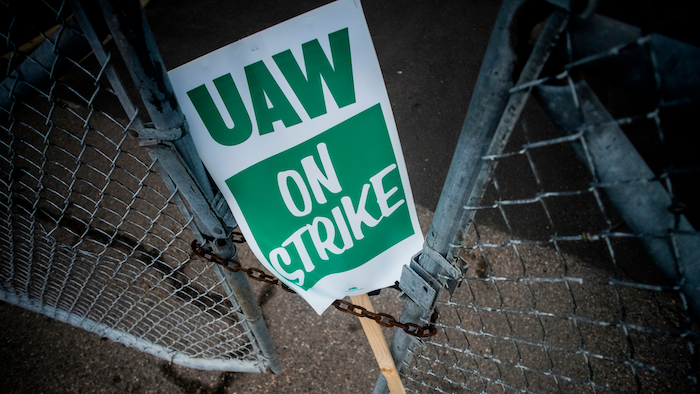 In this Monday, Sept. 16, 2019, file photo, a United Auto Workers strike sign rests between the chains of a locked gate entrance outside of Flint Engine Operations in Flint, Mich. As the United Auto Workers’ strike against General Motors continues, consumers, the company and striking workers are starting to get pinched.
Jake May/The Flint Journal via AP, File

DETROIT (AP) — Contract talks between General Motors and striking United Auto Workers took a step closer to reaching an agreement Wednesday when committees finished their work and sent it to the top bargainers.

The move means that minor issues largely are resolved, and a few bargainers for both sides will now try to come to terms on wages, use of temporary workers and other contentious issues.

UAW Vice President Terry Dittes outlined the development in a letter to members. He says the union presented material to GM and is waiting for a response.

"This back and forth will continue until negotiations are complete," Dittes wrote. "We will continue to bargain this contract until your Bargaining Committee is satisfied that we have achieved an agreement that properly addresses our members' concerns."

In a statement, GM spokesman Dan Flores said the company will "continue to bargain in good faith, and our goal remains to reach an agreement that builds a stronger future for our employees and our company."

Art Schwartz, a former GM negotiator who now runs a labor consulting business in Ann Arbor, Michigan, said shifting work to the main table is a good sign. But it's tough to say how far apart both sides are on the major economic issues, he said.

"It kind of depends on how hard each side holds out. Collective bargaining is the art of compromise," he said. "This is probably a couple people from each side are going to hammer out the final economics." Schwartz said.

The strike by about 49,000 workers, in its 10th day, has halted production at more than 30 GM factories nationwide.

Both sides are losing money, with one analyst estimating the strike costs GM $100 million in profits per day. Workers, on the other hand, got their last GM paycheck last Friday and are scheduled to get $250 in weekly strike pay starting this Friday.