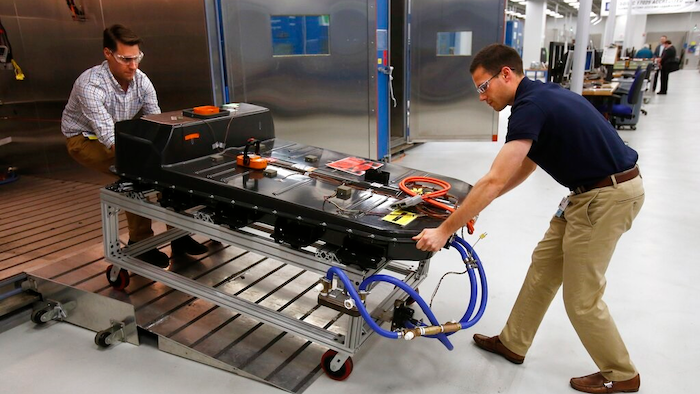 In this Nov. 4, 2016, file photo, a Chevrolet Bolt EV battery pack is removed for testing after undergoing charging and discharging cycles at General Motors Warren Technical Center's Advanced Energy Center in Warren, Mich. If U.S. consumers ever ditch fuel burners for electric vehicles, then the United Auto Workers union is in trouble. Gone would be thousands of jobs at engine and transmission plants across the industrial Midwest, replaced by smaller workforces at squeaky-clean mostly automated factories that mix up chemicals to make batteries.
AP Photo/Duane Burleson, File

DETROIT (AP) — If U.S. consumers ever ditch fuel burners for electric vehicles, then the United Auto Workers union is in trouble.

Gone would be thousands of jobs at engine and transmission plants across the industrial Midwest, replaced by smaller workforces at squeaky-clean mostly automated factories that mix up chemicals to make batteries.

The union is keenly aware of this possibility as it negotiates for the future as much as the present in contract talks with General Motors. Meanwhile, more than 49,000 union workers are on strike against the company and have shut down its factories for the past six days.

GM CEO Mary Barra has promised an "all-electric future," with the company going through a painful restructuring to raise cash in part to develop 20 electric models that it plans to sell worldwide by 2023.

In the contract talks, GM has offered to build an electric vehicle battery factory in Lordstown, Ohio, where the company is closing an assembly plant. The automaker, according to a person briefed on the offer, wants the plant to be run by a joint venture or a battery company. It would be staffed by far fewer union workers who would be paid less than the $30 per hour that UAW members make on the assembly lines, said the person, who didn't want to be identified because contract details are confidential.

For the union, getting the top pay at Lordstown is crucial because battery jobs could one day supplant many of those at GM's 10 U.S. powertrain factories that now employ more than 10,500 hourly workers. Also at stake is the future of the union, which has lost high-paying auto jobs over the past 30 years, said Sam Abuelsamid, an analyst for Navigant Research who follows the auto industry.

"I can see why the UAW would reject such a deal," Abuelsamid said. "To accept a lower wage tier for employees at Lordstown or any other plant where GM wants to do something similar, I think that would be foolish for them."

For the company, however, the lower wages are needed to keep costs competitive with other automakers who will contract out battery cell and pack manufacturing to nonunion factories that pay less than the UAW wage, Abuelsamid said. GM also must reign in expenses as it tries to sell more electric vehicles, which now are more expensive than those powered by gas, he said.

The company won't give details about how many workers would be employed at the Lordstown battery plant or how much they'll be paid. But the number won't be anywhere near the $30 an hour top wage at the assembly plant, which two years ago employed 4,500 people making the Chevrolet Cruze compact car.

The only GM plant comparable to what's being proposed in Lordstown now sits in Brownstown Township, Michigan. About 100 UAW workers there took battery cells made by LG Chem in Western Michigan and combined them into packs for the Chevrolet Volt rechargeable gas-electric car. The Volt was canceled last spring, and now 22 remaining workers make hybrid battery packs and assemble autonomous vehicle equipment.

While there is potential for growth if electric car sales take off and more batteries are needed, no one is sure when or if that will happen in the U.S. Few are predicting that Barra's "all electric future" is coming soon and the Trump administration has proposed rolling back fuel economy requirements.

Fully electric vehicles currently make up about 1.5% of U.S. new vehicle sales, and LMC Automotive forecasts it will rise to only 7.5% by 2030. The forecasting firm doesn't see EV sales hitting 50% of the market until at least 2049.

Globally it's a different story. Navigant sees growth from just over 1 million sales last year to 6.5 million by 2025. The surge is expected because of government incentives and fuel economy regulations in China.

Currently, GM loses thousands on each Chevy Bolt electric car it sells, and it hasn't been able to mass produce enough of them to bring the cost down. Without large-volume production, it's tough to cut the price. Paying full union wages at Lordstown would push costs up.

"You can't be at a cost disadvantage in a market that's in its infancy," said Jeff Schuster, senior vice president for LMC.

Even if the union is successful at getting higher wages at battery plants, engine and transmission jobs will someday start to disappear, Abuelsamid said. He estimates that it will take only 25% to 50% of the current engine and transmission workforce to build battery cells, packs and electric motors. GM and others also could keep outsourcing battery cells and packs to nonunion plants as GM does now for the Bolt.

Whether the union will make a stand on electric vehicles in this round of contract talks remains to be seen. It may decide that it doesn't want to set a lower-wage precedent that could spread to Fiat Chrysler or Ford. But if it can preserve health insurance and get pay raises, job guarantees, more profit-sharing and a path for temporary workers to go full-time, it may punt the issue to future contract talks, says Schuster.

"The ultimate path (to electric vehicles), in our opinion, is so far down the road that I'm not sure it has to be dealt with right now," he said. "I don't know if it has to be the thing that holds up a deal at this stage."

Workers at the powertrain plants know their future is in the balance, said Tim O'Hara, president of the UAW local in Lordstown. He expects the union to try to protect as many higher-paying jobs as it can.

"It's been on a lot of people's minds about the electric future," O'Hara said. "The goal is always to have the same kind of jobs with benefits and wages as you start out with."