The Federal Reserve said Tuesday that manufacturing production climbed 0.5% last month, after a 0.4% drop in July.

Christopher Rugaber
In this Wednesday, Sept. 11, 2019, photo, a man checks on the robotic arms at a factory making industrial robots in Zhengyu town of Haimen city in east China's Jiangsu province. A Chinese envoy is going to Washington on Wednesday, Sept. 18, to prepare for trade negotiations. The announcement Tuesday, Sept. 17, follows conciliatory gestures by both sides ahead of the October talks on their fight over trade and technology, which threatens to dampen global economic growth.
Chinatopix via AP

WASHINGTON (AP) — U.S. factory output increased in August at a solid clip, reversing a sharp drop in July, as production of metals, machinery and chemicals all rose.

The Federal Reserve said Tuesday that manufacturing production climbed 0.5% last month, after a 0.4% drop in July.

Manufacturers have by hit this year by the U.S.-China trade war, which has raised their costs and curtailed their exports. Manufacturing output fell in the first two quarters of this year, the first time that's happened since 2016. In the past 12 months, factory output has fallen 0.4%. 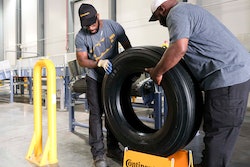