But experts say the grocery getter will live on nonetheless. 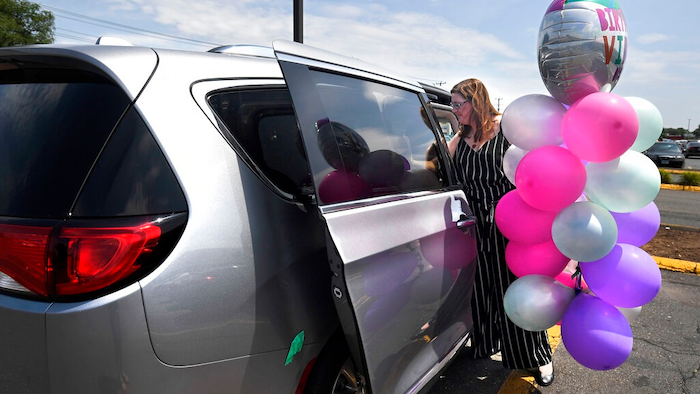 In this Tuesday, July 16, 2019, Melanie Matcheson loads balloons into her Chrysler Pacifica in Southington, Conn. For Melanie Matcheson, no vehicle other than a minivan could efficiently haul her family of two adults and five children ages 2 to 22.
AP Photo/Jessica Hill

DETROIT (AP) — They were the suburban vehicle of choice in the 1990s and early 2000s, but ever since, minivans appeared to be riding the slow lane to extinction.

The soccer moms who once made the boxy people-haulers ubiquitous have shunned them for car-based SUVs with three rows of seats. Many automakers have stopped selling them. In fact, Chrysler sold more minivans by itself in their heyday than the entire industry does today.

But don't turn in the van keys just yet. For the automakers that still make them — Fiat Chrysler, Honda, Toyota and Kia — the minivan business is still good because the competition has bailed, giving them a bigger piece of a shrinking pie. And they're hoping that as more millennials, now ages 23 to 38, raise families, they'll see the value of sliding doors, fold-flat seats, ample storage and easy access to the third row.

Because of their people-hauling capabilities, minivans also hold promise as autonomous vehicles, meaning they may once again become popular — if people don't have to be seen actually driving them.

"There is nothing else that can compete with a minivan," says Tim Kuniskis, head of passenger vehicles for Fiat Chrysler, which leads all automakers in sales with two minivans in the U.S. market. "From a carrying people and stuff perspective, nothing touches it."

Last year, minivan sales sank to 364,000, the lowest level in more than 30 years and only about one-quarter of the 1.33 million sold in 2000, the peak year, according to the CarGurus.com auto website. Sales are down another 16% in the first half of this year, with no end to the decline in sight. That's a far cry from 1993 to 2005, when automakers sold more than 1 million of the vans every year.

Also, minivan market share has slipped from 7.2% of U.S. new-vehicle sales in 2000 to 2.5% this year, according to the Edmunds.com auto pricing site, which provides content to The Associated Press.

Minivan sales generally follow birth rates, which have been falling for 32 years, said George Augustaitis, director of industry analytics for CarGurus, who predicts further declines. "It's going to exist, but it's never going to exist like it once had."

Yet for automakers that are still in, minivans are good business. The only large competitors left for Fiat Chrysler are the Honda Odyssey and Toyota Sienna. Kia offers the Sedona, but sales are relatively small. Other market segments can boast over 1 million sales per year, but they also come with 20 or more competitors, Kuniskis said.

In the early 2000s, just about every automaker had a minivan, with as many as 18 on sale in 2005, CarGurus said. As Ford, General Motors and others exited as sales tumbled, the number shrank to only five this year.

Profit margins on the minivans are high, with a few options pushing the sticker price north of $40,000.

"Balloons rain from the sky every time they sell an Odyssey," said Jeremy Acevedo, senior manager of industry insights at Edmunds.

That can be bad for young families who need the vans but can't afford big price tags. Fiat Chrysler has realized this and in the fall will start selling a Chrysler Voyager, a Spartan version of the Pacifica, starting around $27,000. It likely will replace the ancient Dodge Grand Caravan, which the company has been selling for about the same sticker price. The old van, unveiled in 2008 and last updated in 2011, is the top-selling minivan in the country this year at around 72,000.

For Melanie Matcheson, 44, who lives near Waterbury, Connecticut, no vehicle other than a minivan could efficiently haul her family of two adults and five children ages 2 to 22. She bought an eight-passenger silver Pacifica in mid-June for about $31,000, getting an $8,000 discount.

She rented a Chevrolet Suburban big SUV but didn't like the gas mileage, and she says smaller SUVs lacked trunk space.

Matcheson doesn't care that a minivan could have the stigma of a 1990s soccer mom. "I think the newer ones look very nice," she said.

Fiat Chrysler's Kuniskis is hoping there are more people like Matcheson who see the vans' practicality. He says millennials he has talked to liked the minivans they grew up with and they're now having children. They're expected to surpass baby boomers as the largest population segment, and that could boost sales.

Also, at least one autonomous vehicle company has found the vans optimal for its ride-hailing service. Google spinoff Waymo is buying up to 62,000 Pacificas from Fiat Chrysler and is using them to haul people and test self-driving systems.

CarGurus' Augustaitis says the vans are appealing to Waymo because they are easy to enter and exit and can be used more like a living room or office when autonomous vehicles start carrying people in more places.

"It could see something with autonomous because of how you can outfit them," he said.