State investigators said an equipment failure on that line sparked a November wildfire that wiped out the town of Paradise and killed 85 people. 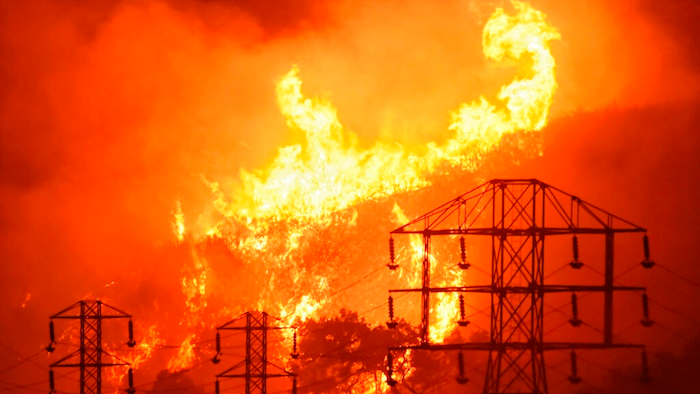 In this Dec. 16, 2017, file photo provided by the Santa Barbara County Fire Department, flames burn near power lines in Sycamore Canyon near West Mountain Drive in Montecito, Calif. A Wednesday, July 10, 2019, report in the Wall Street Journal says Pacific Gas & Electric, which is blamed for some of California's deadliest recent fires, knew for years that dozens of its aging power lines posed a wildfire threat but avoided replacing or repairing them. PG&E says it disagrees with the Journal's conclusions but says it’s "taking significant actions to inspect, identify, and fix" safety issues.
Mike Eliason/Santa Barbara County Fire Department via AP, File

SAN FRANCISCO (AP) — Pacific Gas & Electric, which is blamed for some of California's deadliest recent fires, knew for years that dozens of its aging power lines posed a wildfire threat but avoided replacing or repairing them, it was reported Wednesday.

The Wall Street Journal, using company documents obtained under the federal Freedom of Information Act, reported that the utility told the U.S. Forest Service in 2017 and 2018 that 49 aging steel towers on one transmission line needed replacement and another 57 needed replacement of their hardware and aluminum lines.

The Journal previously reported that PG&E delayed safety work on the line, known as the Caribou-Palermo line, for five years.

State investigators said an equipment failure on that line sparked a November wildfire that essentially wiped out the Northern California town of Paradise and killed 85 people. It was the deadliest and most destructive in state history.

Four other people have been tentatively identified while two bodies remain unidentified.

After the fire, PG&E decided to stop using the line, which was built in 1921.

PG&E also estimated back in 2017 that its towers had an average age of 68 years and some were more than a century old, the Journal said, reporting that the company also said it needed a plan to replace towers and better manage lines to prevent electrical conductors from falling on the ground and causing fires.

Gusty winds that can topple trees and down power lines are concerns for California utilities. Last month, PG&E briefly cut power to thousands of people in selected portions of Northern California to guard against wildfires as the weather turned very windy, dry and hot.

Also in June, PG&E said its workers discovered more than 1,000 high-priority safety risks on its transmission lines and distribution poles over several months of inspections and almost all of them had been fixed.

A federal judge in San Francisco on Wednesday ordered PG&E to provide a "paragraph-by-paragraph" response to the Wall Street Journal story.

PG&E must provide "a fresh, forthright statement owning up to the true extent" of the Wall Street Journal report by July 31, ordered U.S. District Judge William Alsup, who is overseeing PG&E's probation for a natural gas pipeline explosion in 2010 that killed eight people in San Bruno.

Alsup also asked the company to explain its payment of $5 billion in dividends in recent years "at a time when PG&E was aware of the problems" named in the Journal report.

PG&E said it disagreed with the conclusions of the Journal report but "we have acknowledged that the devastation of the 2017 and 2018 wildfires made clear that we must do more to combat the threat of wildfires and extreme weather while hardening our systems."

"As we have disclosed publicly, we are taking significant actions to inspect, identify, and fix these issues with our electric system," the utility said in a statement, adding that "while the number of safety issues we have identified on our electric system is small by percentage, it's unacceptable."

PG&E filed for bankruptcy in January in the face of some $30 billion in potential liability from 2017 and 2018 wildfire damage.