Closure of the Wales plant will result in 1,700 job losses. 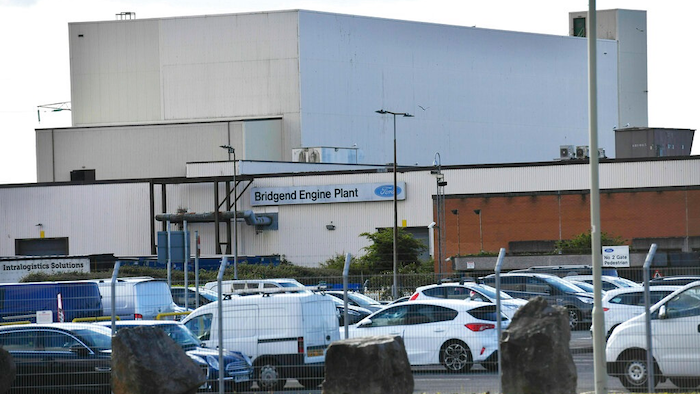 The Ford engine plant near Bridgend, south Wales, Thursday June 6, 2019. The Ford engine plant in Bridgend that employs 1,700 people is "economically unsustainable" and will close next year, the carmaker announced Thursday, blaming declining sales of gasoline engines and the end of a contract with Jaguar Land Rover.
Jacob King/PA via AP

LONDON (AP) — A Ford engine plant in Wales that employs 1,700 people is "economically unsustainable" and will close next year, the carmaker announced Thursday.

The company blamed declining sales of gasoline engines and the end of a contract with Jaguar Land Rover for the closure, due in September 2020.

He said there would be an "enhanced separation program," including help for employees to get new jobs or start their own businesses.

The Bridgend plant opened in 1980 and is a major employer in Wales.

Jeff Beck, regional organizer for the GMB union, said the news was "a real hammer blow for the Welsh economy and the community in Bridgend."

Former Welsh government leader Carwyn Jones, who represents Bridgend in the Welsh Assembly, said "this has all been very sudden. There was no warning about this at all."

"From my perspective I want to know what's going on as to with the workers and want to know a reason for the decision, and to work with Welsh government to see what we can do to help the workers here," he said.

The news is the latest setback for Britain's auto industry, which is struggling both with uncertainties over Brexit as well as global issues buffeting the sector.

Ford announced last month that it was cutting 7,000 white-collar jobs worldwide, several hundred of them in Britain.

Honda announced in May that it will close its western England car factory in 2021. And in February Nissan announced that it would not build a new SUV in Sunderland, northeast England, as previously planned.

Many businesses are worried about the uncertainty around Britain's stalled departure from the European Union. Executives have held back on investments as they lack clarity on what commercial relations will be like between Britain and the rest of the EU, its biggest trading partner.

British Trade Minister Graham Stuart insisted Brexit was not to blame for the Ford closure, stressing that the automotive industry is in "massive global flux."