In his lawsuit, Martin Shkreli alleged that he was "unceremoniously and illegally ousted" from the company he started.

NEW YORK (AP) — Imprisoned pharmaceutical entrepreneur Martin Shkreli sued three executives at a company he started Friday, saying they illegally ousted him and defrauded the company of millions of dollars.

The lawsuit was filed Friday in Manhattan federal court. It seeks unspecified damages.

Shkreli, 36, was dubbed the Pharma Bro and is perhaps best known for boosting the price of a life-saving drug by more than 5,000% and trolling his critics on social media while he worked at Retrophin.

He was convicted in August 2017 of fraud related to his handling of hedge fund investments and Retrophin stock but brashly predicted he'd never go to prison. Shkreli is serving a seven-year prison sentence.

Recently, he's spent time in solitary confinement while the U.S. Bureau of Prisons investigated whether he violated rules forbidding inmates from conducting business and possessing cellphones.

In his lawsuit, Shkreli alleged that he was "unceremoniously and illegally ousted" from the company he started by executives who were "driven by their egos, jealousy and greed."

The lawsuit said Shkreli was fraudulently induced to negotiate the terms of departure from the company before he was tricked into signing a fraudulent document, resigning voluntarily from the company and giving up his rights as the chief executive and founder.

He alleged through the lawsuit that those who ousted him paid themselves over $35 million. 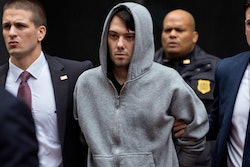 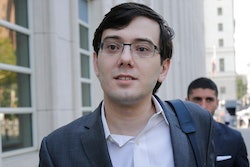