The acidic, metal-laden water has collected in a former mining pit that was closed more than 35 years ago. 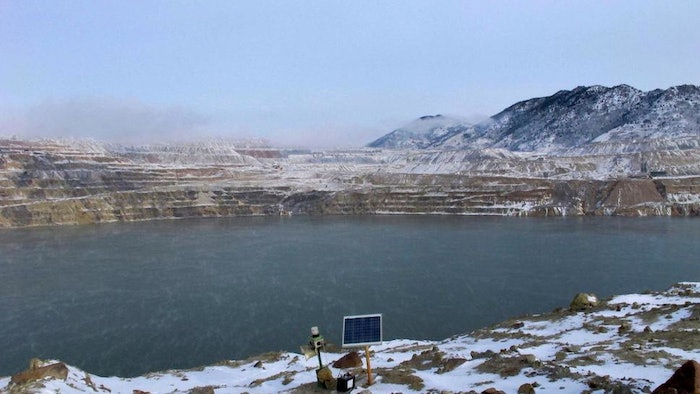 This Dec. 14, 2016 file photo shows Berkeley Pit in Butte. Atlantic Richfield wants to build a second treatment plant to lower the level of acidic, metal-laden water that has collected in a former mining pit in Butte that was closed more than 35 years ago, The Montana Standard reported Wednesday, May 29, 2019.
AP Photo/Matt Volz, File

BUTTE, MONT. (AP) — Atlantic Richfield wants to build a second treatment plant to lower the level of acidic, metal-laden water that has collected in a former mining pit in Butte that was closed more than 35 years ago, The Montana Standard reported Wednesday.

Atlantic Richfield's parent company, BP, hopes to eliminate possible risk in the "unlikely" event of a tailings dam failure at a site where slurry is contained as part of the current treatment process, said Mark Thompson, vice president of environmental affairs for Montana Resources.

If the dam failed, there would be room for water to flow back into the former open-pit copper mine known as Berkeley Pit that now holds nearly 50 billion gallons (189 billion liters) of toxic water, said Brett Clanton, a spokesman for BP.

The pit began slowly filling with contaminated groundwater and storm water in 1982 after Atlantic Richfield turned off groundwater pumps at the former copper mine.

Montana Resources is running a pilot project on a four-step water cleaning process with plans to discharge the water into Silver Bow Creek beginning this summer.

Arco has proposed to the U.S. Environmental Protection Agency to build a larger plant that could draw down water levels by 50 feet to 150 feet (15 to 46 meters) over a 10-year period. The EPA would have to approve the proposal because it is a Superfund site.

BP hopes to have the second plant running by 2021, Clanton said.

A tailings dam failed in Brazil in January and is suspected of killing more than 250 people. The incident "caught BP's attention at the highest levels," Thompson said, and BP wants additional reassurances against something similar happening in Butte.

Montana Resources officials plan to meet with the EPA next week to discuss concerns, including whether the drawdown could destabilize the pit walls and what effect lowering the water level might have on mine tunnels under the city that are flooded with groundwater.