It now appears certain it will not get a financial rescue.

HARRISBURG, Pa. (AP) — The owner of Three Mile Island, site of the United States' worst commercial nuclear power accident, says it now appears certain it will not get a financial rescue from Pennsylvania and said it will go ahead with a planned shutdown starting June 1.

Exelon Corp.'s Wednesday statement comes two years after the Chicago-based energy giant said it would close the money-losing plant without what critics have called a bailout. It's licensed to operate through 2034.

A roughly $500 million package for Three Mile Island and Pennsylvania's four other nuclear power plants has stalled in the Legislature. Exelon has won rescues in three other states, but in Pennsylvania it faced opposition from the state's natural gas industry.

Three Mile Island faces particularly difficult economics because the 1979 accident left it with just one reactor. 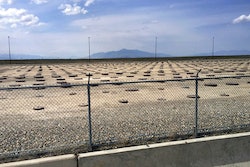