A natural gas drilling byproduct could help a region still struggling from the loss of industrial and manufacturing jobs decades ago. 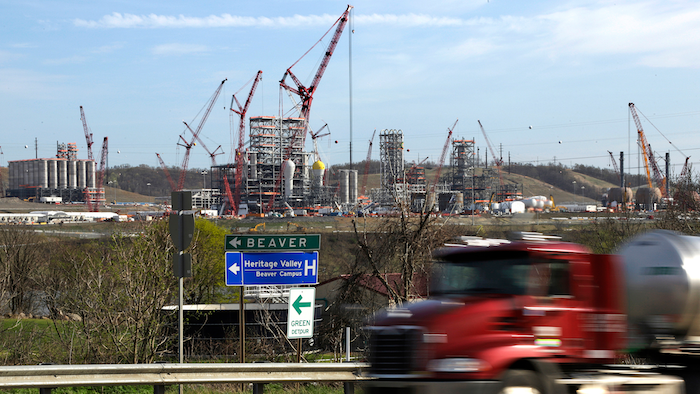 In this April 18, 2019 file photo a tanker truck passes a petrochemical plant being built on the banks of the Ohio River in Monaca, Pa., for the Royal Dutch Shell company. The plant, which is capable of producing 1.6 million tons of raw plastic annually, is expected to begin operations by 2021.
AP Photo/Gene J. Puskar, File

CLEVELAND (AP) — Plans are underway in Appalachia to create two underground facilities to store ethane, a byproduct of natural gas drilling seen as integral to revitalizing a region still struggling from the loss of industrial and manufacturing jobs decades ago.

Meanwhile, Appalachia Development Group in Charleston, West Virginia, wants to build a much larger storage facility somewhere in the tristate region. Company President and CEO Steven Hedrick said the creation of a petrochemical and plastics industry could lead to billions of dollars in investment and tens of thousands of jobs in the coming years.

"The people of Appalachia deserve this opportunity," Hedrick said.

Technological advances in hydraulic fracturing, better known as fracking, have helped fuel an oil and gas boom in Appalachia and southwest states like Texas. It has also provided an abundant supply of ethane that is driving the expansion of the petrochemical industry in its epicenter along the Gulf Coast of Texas and Louisiana, where most ethane storage also is located.

Ethane is a gas when brought to the surface along with methane, the far more abundant "dry" natural gas used to cook our food and heat our homes. Ethane is colorless, odorless and, like methane, highly combustible. It becomes a liquid when super-cooled at processing plants called fractionaters that separate out other natural gas liquids. While most ethane produced today is shipped out of the region via pipelines, a portion is "rejected" and winds up in the natural gas stream.

"Cooking eggs with ethane in the morning is like cooking eggs with hundred-dollar bills," Hedrick said, paraphrasing U.S. Energy Secretary Rick Perry. "It gets the job done, but it doesn't make sense."

Industry experts say there is enough potential ethane production in Appalachia's Utica and Marcellus shale fields to supply four or five petrochemical plants in the region. They also say underground storage is vital to providing an uninterrupted supply to those plants.

"When you look at the ethane market that is developing, I just can't imagine those plants operating without storage in that market," Energy Storage Ventures' David Hooker said.

Energy Storage Ventures' subsidiary, Mountaineer NGL Storage, hopes to begin construction along the Ohio River as early as this summer. Hooker said initial plans call for building a facility capable of storing 1.5 million barrels of natural gas liquids, primarily ethane but also propane and butane. The company will use fresh water to carve out space in a salt formation more than 6,500 feet (1,980 meters) underground. Resulting brine water from construction will be transported across the Ohio River via pipeline for use at an alkaline plant in West Virginia, Hooker said.

Appalachia Development Group is considering sites in the region for its Appalachia Storage Hub and Trading Facility, which Hedrick said would be capable of storing 10 million barrels of natural gas liquids.

Hooker said the cost of his project is estimated at $150 million and is fully financed. The estimated cost of the Appalachia Development Group's storage facility is $3.4 billion, which Hedrick attributes to aboveground expenses, such as building pipelines.

Appalachia Development Group is seeking $1.9 billion in federal loan guarantees for its project.

The first signs of the emergent ethane petrochemical industry are clearly visible northwest of Pittsburgh, near Monaca, Pennsylvania, where thousands of workers are building an ethane "cracker" plant for Royal Dutch Shell capable of producing 1.6 million tons (1.45 million metric tons) of raw plastic annually. The plant's ethane supply will come from Shell's own pipeline system connected to processing facilities in Ohio and Pennsylvania, negating the need for bulk storage.

Petrochemical plants without those resources will need ready access to ethane stored underground, according to experts. That includes a much anticipated cracker plant for ethane conversion that a partnership between two Asian companies is considering building in eastern Ohio's Belmont County. The partnership between Thailand's PTT Global Chemical and South Korea's Daelim Industrial has received clean air and water permits from the state but hasn't fully committed to construction, despite having already spent more than $100 million on planning, according to partnership spokesman Dan Williamson.

Industry analysts and backers of the two storage hubs say the availability of ethane storage and the decision whether to build the plant are intertwined.

"To me, the key is PTT Global," Hooker said, adding that he "can't imagine" the plant operating without ethane storage. He said he's had conversations with PTT-Daelim.

"The two go hand in glove," Hedrick said. "We need both at the same time. Without customers, it's awfully hard to make a business case."