They say the move will allow the board to act more nimbly and efficiently. 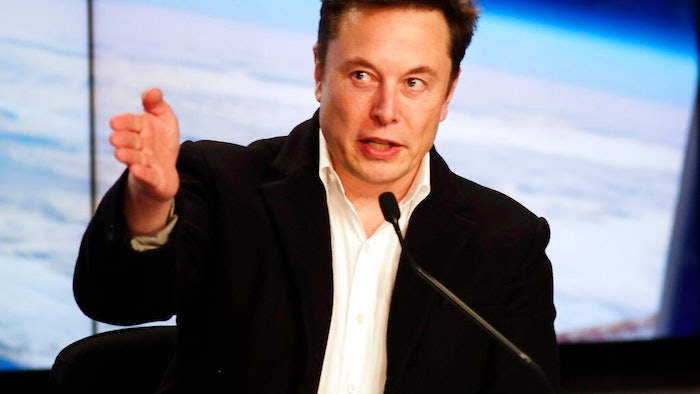 In this March 2, 2019 file photo, Elon Musk, CEO of SpaceX, speaks during a news conference after the SpaceX Falcon 9 Demo-1 launch at the Kennedy Space Center in Cape Canaveral, Fla. Tesla plans to cut its board of directors from 11 to seven in a move the car maker says will allow the board to act more nimbly and efficiently. Tesla says the four directors who will depart aren't leaving because of any disagreement with the company. Tesla disclosed the changes in regulatory filings Friday, April 19, 2019.
AP Photo/John Raoux

PALO ALTO, Calif. (AP) — Tesla plans to cut its board of directors from 11 to seven in a move the electric-car maker says will allow the board to act more nimbly and efficiently.

Tesla says the four directors who will depart aren't leaving because of any disagreement with the company.

The board has come under closer scrutiny since August, when CEO Elon Musk tweeted that he had lined up funding and was considering taking the Palo Alto, California-based company private at $420 per share. That didn't happen, and regulators accused Musk of securities fraud.

Tesla disclosed the upcoming changes to the board in regulatory filings Friday.

Brad Buss, a director since 2009, and Linda Johnson Rice, who joined the board in 2017, plan to leave at the annual meeting in June. Two early Tesla investors, Stephen Jurvetson and Antonio Gracias, plan to leave next year if shareholders agree to shorten Gracias' term by a year.

"This shakeup of the board has been long overdue," said Stephen Diamond, a corporate-governance expert and associate law professor at Santa Clara University who has urged changes in oversight at the company. "It is a very important step towards greater accountability to Tesla's owners, the public shareholders, because it breaks up the old-boys network around Elon Musk."

The shareholder meeting is June 11 in Mountain View. Shareholders will vote on other proposals that the company says will improve its corporate governance, including shortening directors' terms from three years to two years, and dropping a supermajority voting requirement.

The changes are the latest moves by Tesla in response to criticism that the board has lacked independence from the company's mercurial CEO.

The Securities and Exchange Commission sued Musk last year, accusing him of misleading investors by falsely claiming in a post to his 22 million Twitter followers that he had arranged funding to take Tesla private.

The SEC sought to remove Musk as CEO, but the two sides settled with Tesla agreeing to pay $40 million and have Musk step down as chairman for at least three years. In December, Tesla named two independent board members as part of the agreement.