Another Engine Problem, Recall for Hyundai

Hyundai and Kia have been plagued by engine failures and fires since 2015. 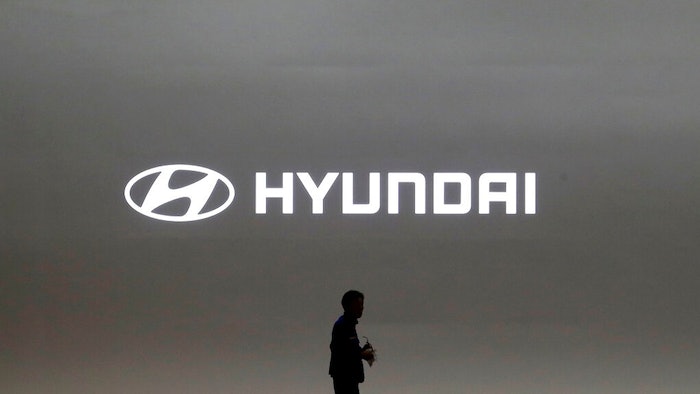 In this March 28, 2019, file photo a journalist passes by the logo of Hyundai Motor during a media preview of the Seoul Motor Show in Goyang, South Korea. Hyundai has found a new problem that can cause its car engines to fail or catch fire, issuing yet another recall to fix problems that have affected more than 6 million vehicles since 2015.
AP Photo/Ahn Young-joon, File

DETROIT (AP) — Hyundai has found a new problem that can cause its car engines to fail or catch fire, issuing yet another recall to fix problems that have affected more than 6 million vehicles during the past 3 ½ years.

The Korean automaker, under pressure from safety regulators, is recalling about 20,000 Veloster cars in the U.S. and Canada because fuel can prematurely ignite in the cylinders around the pistons. That can cause excessive pressure and damage the engine, causing vehicles to stall and in some cases catch fire, according to Hyundai documents posted Friday by the U.S. National Highway Traffic Safety Administration.

It's a different problem from what has caused the rest of the recalls since 2015 from Hyundai and its affiliated automaker Kia, which have been plagued by engine failures and fires across the U.S.

The recall, which covers only the 2013 Veloster with 1.6-liter engines, is due to a software problem that has been found only in that model year and not in other Hyundai engines, company spokesman Michael Stewart said. Kia spokesman James Bell said in a statement that the automaker didn't use any engines from the plant that made Veloster engines.

Jason Levine, executive director of the Center for Auto Safety, a consumer group that has petitioned the government seeking more Hyundai and Kia recalls, said the fire and engine problems keep spreading to more vehicles.

"This recall raises the question of whether we are even beyond the tip of the iceberg with these non-crash fires with both of these manufacturers," Levine said. "How many times are we going to hear from either Hyundai or Kia that these circumstances are unique to a particular model and then have another recall or fire situation announced weeks or months later?"

Hyundai said in documents that it has been analyzing fire claims from owners and reporting the findings to NHTSA, which in December raised questions about the Veloster. The company traced the problem to engine control software in vehicles made at the Ulsan plant in South Korea from April 26, 2012 to Oct. 16, 2013, according to documents.

While claims were high for the 2013 model, they decreased starting in 2014, the company wrote. Software was updated on vehicles at the factory in October of 2013, the company said. Hyundai wrote that it's not aware of any crashes or injuries.

Dealers will install updated software on the recalled cars. Owners will be notified starting May 13.

In February, Kia announced that it would recall the Soul small SUV with the same-size engine due to fire and engine failure problems, but Stewart said that was for a problem that was different from the Veloster.

The Soul recall covered nearly 379,000 vehicles from 2012 through 2016. Documents showed that high exhaust gas temperatures can damage the catalytic converters, which control pollution. That can cause abnormal combustion and damage pistons and connecting rods. A failed connecting rod can pierce the engine block and cause oil leaks that can cause fires.

So far Hyundai and Kia have recalled about 2.4 million vehicles to fix problems that can cause fires and engine failures since 2015. In addition, the automakers are doing a "product improvement campaign" covering another 3.7 million vehicles to install software that will alert drivers of possible engine failures and send the cars into a reduced-speed "limp" mode if problems are detected.

Both automakers are under investigation by NHTSA for potentially being slow to fix faulty vehicles.

The Center for Auto Safety says it has found more than 300 Hyundai-Kia fire complaints in a government database, which is high compared with similar vehicles. Levine has said fire complaints to NHTSA have come from across the country, including a death in Ohio in April of 2017.