It could be an alternative to burning it off at well sites.

BISMARCK, N.D. (AP) — A new study indicates it might be economically feasible for North Dakota oil companies to provisionally store natural gas underground instead of burning it off at well sites.

The University of North Dakota's Energy and Environmental Research Center study found that inserting natural gas into an underground rock formation and extracting it later could allow companies to produce more oil and meet the state's gas capture goals, the Bismarck Tribune reported .

The North Dakota Industrial Commission approved $140,000 for the study as it searches for solutions to reduce natural gas flaring while companies catch up on building natural gas processing plants, pipelines and other infrastructure.

John Harju, vice president for strategic partnerships at the EERC, said the best option will always be to capture the natural gas and transport it by pipeline to a processing plant.

But when that's not an option due to inadequate infrastructure, research showed temporarily storing the gas is one way companies could continue increasing oil production without increasing flaring.

"It's another tool for the toolbox," Harju said.

North Dakota regulators amended rules in 2014 aimed at natural gas flaring after more than a third of the gas went up in smoke, drawing criticism from environmentalists and many residents who said the state was losing revenue from the wasted gas. Critics also contended that it contributed to unnecessary carbon dioxide emissions. 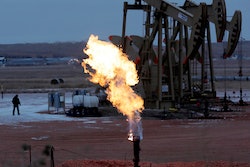 Harvest Water from the Air