The move reflects a trend among larger companies moving to major cities for deeper pools of talent, busier airports and other amenities. 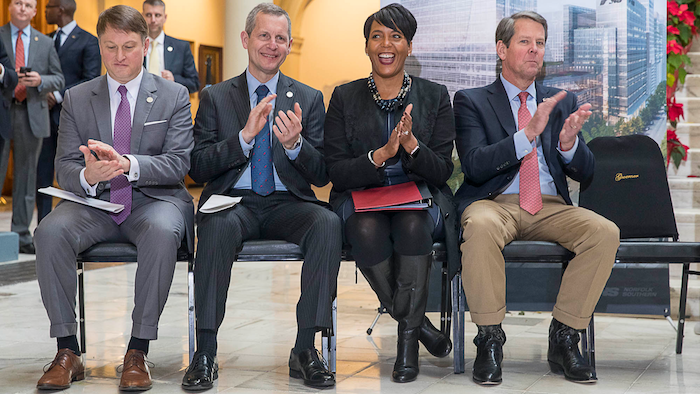 Commissioner of the Georgia Department of Economic Development Pat Wilson, from left, Norfolk Southern CEO Jim Squires, Atlanta Mayor Keisha Lance Bottoms and Georgia Governor-Elect Brian Kemp react to a speaker during a press conference in the Georgia State Capitol building in Atlanta. During the presser, Fortune 500 company Norfolk Southern officially announced that they will be moving their headquarters to Atlanta.
Alyssa Pointer/Atlanta Journal-Constitution via AP

The company plans to build a new headquarters campus with 750,000 square feet (69,600 square meters) of office space in the city's Midtown area, according to records from Atlanta's economic development authority.

"When you consider those 850 new jobs on top of —in excess of — 4,700 jobs that are currently Norfolk Southern employees in the state of Georgia, they suddenly become a major player in our state's economy," Deal said at Wednesday's news conference. "This is the 17th Fortune 500 company to come to our state either initially or by way of relocation," Deal added.

The move reflects a broader trend among larger companies that are moving to major cities for their deeper pools of talent, busier airports and other amenities that attract skilled workers. Robert McNab, an economics professor with Old Dominion University in Norfolk, said Norfolk Southern's decision reflects the same qualities online retailer Amazon was looking for while scouting locations for its second headquarters.

Caterpillar made a similar move from Peoria, Illinois, to suburban Chicago. Boeing also moved its headquarters from Seattle to Chicago. "What we're seeing across the United States and really across the world is that as corporations become more global and complex, they need an area that offers your workforce a high quality of living," McNab said. "But also you need the ability to travel. You need an airport that goes anywhere."

It also was inevitable that Norfolk Southern would consolidate corporate operations between Norfolk and Atlanta, where about 2,000 employees already work, McNab said. Plus, he said Atlanta and the state of Georgia offered strong financial incentives.

Stefanie Paupeck Harper, a spokeswoman for the Georgia Department of Economic Development, said official numbers were not available because "all the incentive documents have not been signed."

Norfolk Southern's railroad subsidiary operates in 22 states and the District of Columbia, transporting freight that includes automotive and industrial products and coal. It says it serves every major container port in the eastern U.S. "As a city founded as the terminus of a railroad line, it means so much for Atlanta to have Norfolk Southern choose to locate their headquarters here," Eloisa Klementich, president and CEO of Atlanta's economic development authority, said in a statement shortly after the announcement.

The company's future depends on collaboration with its customers, suppliers and partners, along with "ready access to technology, talent, and our 22-state network," Norfolk Southern CEO James Squires said in a statement. "A unified office team in a new Atlanta headquarters will connect Norfolk Southern with every resource needed for success," he said.

The effect of the company's move on Norfolk and the surrounding Hampton Roads' region will be more psychological than it is economic, said McNab, the economics professor. The area is losing hundreds of well-paying jobs as well as people who had served on charitable boards and as mentors. But the number is a minute fraction of the area's 790,000 jobs.

More notable is the loss of a Fortune 500 company in a region that only had three. The remaining two are Dollar Tree and Huntington Ingalls Industries, which builds the U.S. Navy's aircraft carriers.

Bryan K. Stephens, president & CEO of the Hampton Roads Chamber, said his main concern "is the optics of this from other businesses. When you lose other Fortune 500 companies, it can be misinterpreted that the company was disappointed with the area." Stephens said Norfolk Southern's move is purely a business decision and he disputed any claims that the region lacks a deep talent pool.