Lawyers for the victims said if there is no response by the deadline, they will seek to freeze part of the company's assets in South Korea.

TOKYO (AP) — Lawyers for Korean wartime forced laborers have demanded that a Japanese steelmaker respond to their request to discuss compensation, warning Tuesday that they will otherwise take steps to freeze its assets in their country.

The two lawyers asked Nippon Steel & Sumitomo Metal Corp. in Tokyo to respond by 5 p.m. on Dec. 24. They said if there is no response by the deadline, they will seek to freeze part of the company's assets in South Korea, including shares of PNR, its joint venture with Korean steelmaker POSCO.

South Korea's top court in October ordered Nippon Steel to pay 100 million won ($87,680) each to four plaintiffs forced to work at the company during Japan's colonial rule of the Korean Peninsula. The court made similar rulings on another Japanese company, triggering disputes between the two countries.

"If we find that (the company) doesn't want to have negotiations and communication by then, we'll launch steps to seize its assets in South Korea within that week," Lim Jae-Sung, one of the attorneys who visited the company to submit the request, told a news conference.

Lim said he and his colleagues have found out that Nippon Steel holds about 2.34 million PNR shares that could be worth about 11 billion won ($9.9 million). More than 3,000 intellectual properties that Nippon Steel registered in South Korea could also be frozen, he said.

Freezing assets is not their primary goal and they'd rather have negotiations, as their ultimate goal is to get justice for the victims, Lim said. He said the only survivor among the four plaintiffs is already 94. "We hope the company responds sincerely," he said.

Japan's government and the companies that used Korean laborers maintain that all wartime compensation issues were settled by a 1965 treaty between the governments and that South Korean rulings violate international law. South Korea says Japan used about 220,000 wartime Korean forced laborers.

Nippon Steel said it received the lawyers' request in a statement Tuesday but its position has not changed, and that it will consult with the government and take appropriate steps.

The recent rulings in South Korea are threatening to undermine relations with Japan, which has argued that the issue of forced laborers was settled when Tokyo and Seoul signed a treaty in 1965 that restored diplomatic ties and had Japan provide $500 million to South Korea in economic assistance rather than compensation. South Korea says the treaty does not terminate individuals' right to seek compensation for the inhumane experiences they were forced into.

Japan acknowledged its wartime aggression and apologized to Asian victims in 1995, but has since significantly backpedaled under Prime Minister Shinzo Abe's nationalistic government. 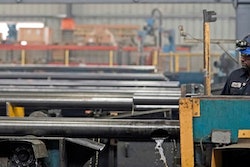 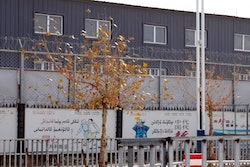 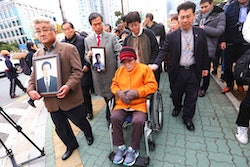