Nissan Motor Co. ousted him as its chairman last week, but Renault has kept Ghosn as chief executive. 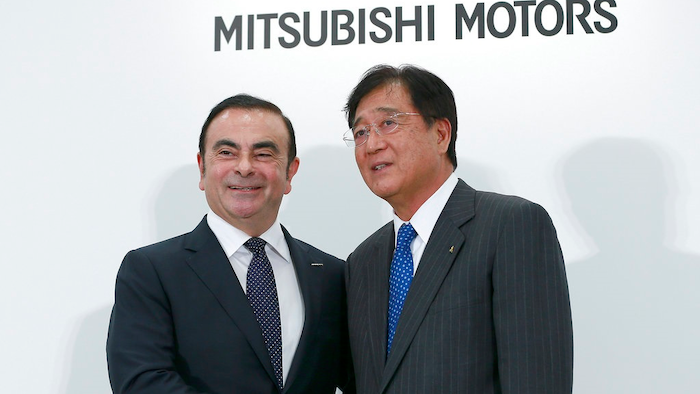 In this Oct. 20, 2016, file photo, Nissan Motor Co. President and CEO Carlos Ghosn, left, and Mitsubishi Motors Corp. Chairman and CEO Osamu Masuko pose for photographers after their joint press conference at the Nissan headquarters in Yokohama, near Tokyo. The board of Mitsubishi Motors is meeting Monday, Nov. 26, 2018, to decide whether to oust Carlos Ghosn as chairman at the Japanese automaker, which is allied with Renault-Nissan.
AP Photo/Eugene Hoshiko, File

TOKYO (AP) — The board of Japanese automaker Mitsubishi Motors, which is allied with Renault and Nissan, voted unanimously Monday to dismiss Carlos Ghosn as its chairman following his arrest last week.

Prosecutors arrested Ghosn on Nov. 19 on suspicion he under-reported his income by $44 million over five years. Nissan Motor Co. ousted him as its chairman last week, saying an internal investigation prompted by a whistleblower also found Ghosn misused company money and assets.

Mitsubishi Motors' CEO Osamu Masuko, chosen by the board as acting chairman pending a shareholders' meeting, said Ghosn would not be able to perform his duties, considering his arrest and Nissan's dismissal of him as chairman.

Masuko said he did not know the specifics of the criminal allegations and declined comment on the case.

When asked for his personal view about the situation, Masuko said he was baffled.

"To be honest, I was shocked, and I couldn't believe it," he told reporters at Mitsubishi Motors' showroom at headquarters. "I still can't figure out why, and I just don't understand."

But Masuko insisted the three-way alliance will persevere, saying it's critical for the automakers' futures, especially in working together on new technologies such as autonomous driving, artificial intelligence and connectivity for vehicles.

"We believe the alliance is needed," Masuko told reporters at Mitsubishi Motors' showroom at headquarters. "Where the three companies are headed is not confrontation."

Ghosn was central in creating the alliance, but would have had to leave eventually, he said, adding just that the "timing had come sooner."

Renault has kept Ghosn as chief executive, while appointing an interim chair while the company awaits more information about the allegations against him.

The disruptions over Ghosn's case have added to worries about the future of the alliance between Renault, Nissan and Mitsubishi, whose status as the most recent addition could be more precarious.

European media have speculated that the case against Ghosn was partly driven by a desire to fend off moves to merge Renault and Nissan and keep the company under Japanese control. Resentment within the Japanese automaker against Ghosn's pay and power may also have played a role.

Ghosn has been a dominant force in the Japanese auto industry for nearly two decades. He led the addition of Mitsubishi into the alliance in 2016 after the smaller automaker was embroiled in an inspections reporting scandal. Nissan holds a 34 percent stake in Mitsubishi.

Japanese media, citing unidentified sources, are reporting that Ghosn and Greg Kelly, an executive who was arrested on suspicion of collaborating with him, are asserting their innocence. Ghosn has not commented publicly.

The two executives have not yet been charged. Under Japanese law, a suspect can be held in custody for up to three weeks per suspected charge without any charges being filed.