The community was located next to an industrial complex long known for its distinctive odor, and a place that many residents said had become too polluted to live in.

It's been 15 years since Marcia Llewellyn left Norco, Louisiana, a community located next to an industrial complex long known for its distinctive odor, and a place that many residents said had become too polluted to live in.

"That's what I always remember about it — the smell," Llewellyn said as she stood inside her home on Union Street in Montz, a sleepy town along River Road on the east bank of St. Charles Parish. "You know the chemicals from the plants there had to be very strong, with a smell like that."

This month, Llewellyn was shocked to discover her dead-end street in the quiet neighborhood she calls home might carry even more significant health risks.

According to a recent report from the U.S. Environmental Protection Agency, residents in her census tract face the highest risk of breast or lymphoid cancers of anyplace in the country because of emissions of the carcinogen ethylene oxide. The chemical is produced in large amounts at the Union Carbide Corp. plant across the Mississippi River in Taft.

After the report came out, a spokeswoman for Dow Chemical Co., which owns Union Carbide, acknowledged that the company is one of the largest producers of ethylene oxide in the country but said it has "safely produced" it in St. Charles Parish since the company took ownership of the plant in 2001.

However, understanding of the dangers associated with the chemical has changed over time, according to the EPA. It was only categorized as a carcinogen in 2016.

Llewellyn, 58, said she wasn't aware of the EPA's latest National Air Toxics Assessment, which came out in August. And, she said, she didn't think much about chemical exposure when deciding on the best place to live with her sisters, nephews and a year-old baby.

"I mean, I had concerns, but they've always been in the back of my mind," she said.

Indeed, news of cancer risk from the airborne pollutant has been slow to infiltrate many neighborhoods in the River Parishes.

About 10 miles upriver, a small group of activists in St. John the Baptist Parish are more in-the-know about the EPA's latest assessment, which focused on ethylene oxide based on chemical emissions data from 2014.

That's because they mobilized several years ago, when the EPA identified areas around the Denka Performance Elastomer plant in LaPlace as the most at-risk in the U.S. from the "likely carcinogen" chloroprene, a chemical used to make synthetic rubber that has been produced at the plant for decades.

Elsewhere, however, many residents are dubious or even fatalistic when presented with the emissions data — an unsurprising response, environmentalists say, for people accustomed to living in the corridor between New Orleans and Baton Rouge that is known for its reliance on the petrochemical industry.

In areas of St. Charles Parish where the risk is high, many residents seem torn between acknowledging the findings of the air pollution study and defending the chemical companies that employ their friends and family members.

Just a handful of local and state elected officials are starting to question the safety of the air in neighborhoods and schools throughout St. Charles, St. John and Ascension parishes as they dig into the data provided by the EPA study.

Overall, the reaction in the River Parishes stands in stark contrast to the outrage that has erupted in Willowbrook, Illinois, where the Sterigenics International facility produces ethylene oxide, commonly used to sanitize medical equipment, fumigate spices, and make polyester and antifreeze.

There, citizen groups quickly organized, and the political pressure grew so furious that Illinois Gov. Bruce Rauner called for the plant to be shut down.

For his part, Louisiana Gov. John Bel Edwards declined to comment on the EPA study at a press conference earlier this month, saying he had not had a chance to catch up on the issue.

Other elected officials tasked with representing St. Charles and St. John parishes have been equally silent. Of 20 council members, school board members, state representatives and senators contacted about the emissions, only seven responded. All but two said they would have to study the issue further before taking any action.

"Shouldn't they have rolled up their sleeves and looked into it by now?" Rolfes asked. "And just imagine how it is for those who live across from these facilities. They get no response."

As for Llewellyn, she believes she shouldn't have to think about air pollution when choosing a place to live.

"Yes, it bothers me," she said. "I would like to live in a safe area. You go outside and breathe the air and you might get sick — that doesn't sit well."

In Louisiana, the Union Carbide Corp. plant is the largest producer of ethylene oxide and has been manufacturing the chemical since the late 1960s.

While the chemical is produced throughout the United States, the highest cancer risk from emissions is across the river from the plant in census tract 601, where Llewellyn lives.

There, scientists say, residents face a cancer risk 700 times greater than the EPA's goal of a 1-in-a-million, and seven times what the agency says is in the "upper limit" of what's acceptable for humans.

While those eye-popping numbers are a surprise for some, they seemed about right to 34-year-old Brad Trepagnier, who has been working at chemical plants since his early 20s.

But the situation is complicated, he said, because the chemical plants drive the economy for the towns most affected by the pollution.

"I've always been at risk, but I guess that's what I get for living close to all these plants," he said. "That's what we choose."

Across the river, Nolan Darensbourg has lived about a mile west of the Union Carbide plant his entire life.

He said he'd be "willing to move" if someone convinces him that ethylene oxide poses a real risk, but he's not yet convinced that his health is in peril.

"If it's proven that it's bringing up cancer and, you know, of course I'm moving," Darensbourg said. "Of course — there's no reason to stay here."

Others say they feel powerless against the industry, and have all but given up trying to fight it.

Nadine Washington can name several friends and neighbors who have been diagnosed with cancer in recent years, and she thinks the pollution had something to do with it.

But she has been in Killona her entire 59 years, in a home she inherited from her grandmother, and can't afford to leave, she said.

"We know they was releasing something that was going to kill us, and one day would have caused some kind of cancer," Washington said. "Ain't nothing we could've did about it. We didn't know how to go about doing anything about it."

Although some residents are quick to express concern and even outrage over the ethylene oxide emissions, few said they have made the effort to call their state legislators, congressional representatives or even local council members.

In the meantime, Sen. Edward Price, a Democrat from Gonzales, is one of the few state elected officials in Louisiana who have expressed willingness to take action after reading the EPA's report.

Price said that he had called on the Louisiana Department of Environmental Quality to work with the EPA on a future ambient air monitoring program in St. Charles and St. John parishes.

"Anytime you have anything like this there is a concern," Price said. "We have to make sure (the companies) are meeting emissions standards and aren't putting an overbearing burden on these parishes."

But officials with the DEQ say that as of now, they have no set plans to test for air quality. First, they're deferring to the EPA to set a national standard for emissions. In the meantime, said Greg Langley, a spokesman for DEQ, "residents don't need to be panicked" by the risk estimates so far.

"I think our message at this point is that even though this change has been made, it's a paper change," he said. "It's a change in a computation."

Officials with the EPA, who based the recent report on data from the chemical plants themselves, have said they may decide to do some monitoring. But even if they do, that process will take time, because first scientists have to figure out just how much of the chemical is permeating the air.

Based on the studies and evidence, the EPA determined that a very small amount of the chemical — just .003 micrograms per cubic meter — could cause a person to develop cancer if they have constant exposure over a lifetime, or 70 years.

"We just don't have anything to measure these emissions," Langley added. "It's essentially zero. If it's down as low as we want, we can't measure it."

Langley also said that official emissions standards have not been updated since ethylene oxide was reclassified as a carcinogen in 2016, so there is no way to "force" chemical companies to reduce their emissions.

A spokeswoman for Dow said their emissions have long been within legal limits, and Langley said the plant has been regulated in Louisiana for the last 20 years.

Most government officials who responded said they hadn't fully had a chance to review the EPA's findings, and so couldn't pass judgment on how they might affect their communities or constituents.

"The EPA report is alarming. That's what I have to say," said St. Charles Parish Councilwoman Marilyn Bellock. "I'm assuming we're going to get together as a council and talk about a plan of action."

To be sure, there are activists who are trying to organize residents in the most affected neighborhoods.

"For me it's hard to understand how this could take place," said Taylor, president of the Concerned Citizens of St. John. "Where is the government? Where are the regulatory people? Where are the agencies that are supposed to be protecting us from these people?"

He added: "It seems to me that they've completely abandoned us and that they're in collusion with the petrochemical plants. They're not regulating these people. How could this go on?"

Members of the group have long complained about health problems ranging from cancer to rashes and respiratory illnesses, and many were quick to blame the neighboring plants.

Their goal, they say, is to create a new group across the River Parishes that will be politically influential enough to field candidates in the 2019 legislative elections.

"The people are very disturbed," said Shondrell Perrilloux, a 40-year-old contractor. "Our government appears to be failing us. Their reactions are not as curious and as emboldened and concerned as the citizens' are." 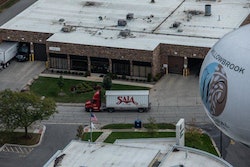