Indra Nooyi has been with PepsiCo for 24 years. 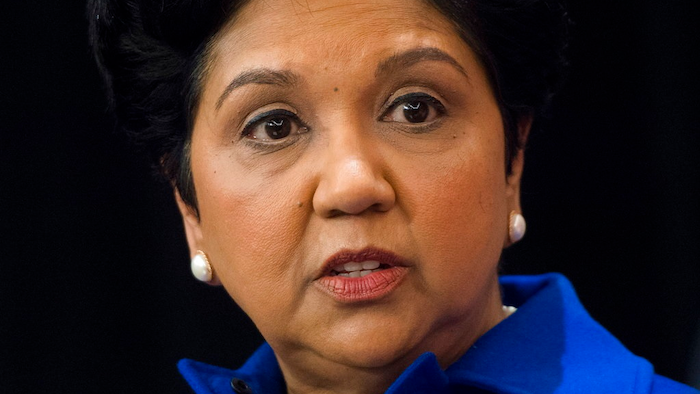 PURCHASE, N.Y. (AP) — Longtime PepsiCo CEO Indra Nooyi will step down as the top executive and the world's second-largest food and beverage company.

Nooyi, who was born in India, is a rarity on Wall Street as a woman and a minority leading a Fortune 100 company. She oversaw the company during a turbulent time in the industry that has forced PepsiCo, Coca-Cola Co., Campbell Soup Co. and Mondelez International Inc. to shake up product portfolios that had been the norm for decades as families seek healthier choices.

Ramon Laguarta, who has been with the company for more than two decades, will take over as CEO in October, the company said Monday. Nooyi will remain as chairman until early next year.

"Today is a day of mixed emotions for me. This company has been my life for nearly a quarter century and part of my heart will always remain here," Nooyi said in a prepared statement. "But I am proud of all we've done to position PepsiCo for success, confident that Ramon and his senior leadership team will continue prudently balancing short-term and long-term priorities, and excited for all the great things that are in store for this company."

The 54-year-old Laguarta has held various positions in his 22 years at PepsiCo, which is based in Purchase, New York. He currently serves as president, overseeing global operations, corporate strategy, public policy and government affairs. He previously served as CEO of the Europe Sub-Saharan Africa region. Prior to joining PepsiCO, Laguarta worked at confectionary company Chupa Chups.

Laguarta will be the sixth CEO in PepsiCo's history, with all of them coming from within the company.