The ISM manufacturing index rose to the highest level since February. 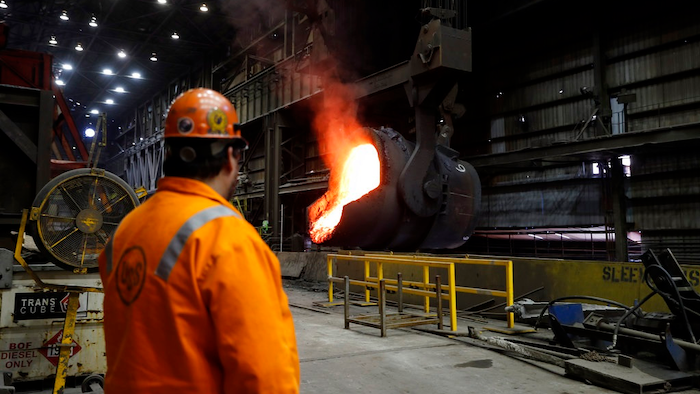 In this Thursday, June 28, 2018, file photo senior melt operator Randy Feltmeyer watches a giant ladle as it backs away after pouring its contents of red-hot iron into a vessel in the basic oxygen furnace as part of the process of producing steel at the U.S. Steel Granite City Works facility in Granite City, Ill. On Monday, July 2, the Institute for Supply Management, a trade group of purchasing managers, issues its index of manufacturing activity for June.
AP Photo/Jeff Roberson, File

WASHINGTON (AP) — American factories expanded at an unexpectedly fast pace in June, another sign of strength for U.S. industry. But U.S. manufacturing will have to contend in coming months with uncertainty over trade and a strengthening dollar.

The Institute for Supply Management, a trade group of purchase managers, says its manufacturing index rose last month to 60.2. That's the highest level since February and up from 58.7 in May. Anything over 50 signals growth, and U.S. factories are on a 22-month winning streak.

Production and new export orders grew faster in June. Hiring and new orders overall grew, but more slowly than they did in May.

But survey respondents expressed worries about the Trump administration's trade policies. The United States has slapped tariffs on imported steel, drawing retaliatory taxes from the European Union and Canada, among others. Moreover, an uptick in the value of the dollar against other currencies risks making U.S. goods more expensive in foreign markets.

"For now at least, the strength of the domestic economy is more than offsetting any increased uncertainty on trade policy," Michael Pearce, senior U.S. economist at Capital Economics, wrote in a research note. "However, with the dollar appreciating by 6 (percent) since April, global growth slowing and retaliatory tariffs just beginning to bite, the sector looks unlikely to fare so well for long."