The farmers argue that Pruitt's actions supporting the oil & gas industry have hammered demand for ethanol, hurting both ethanol and corn prices. 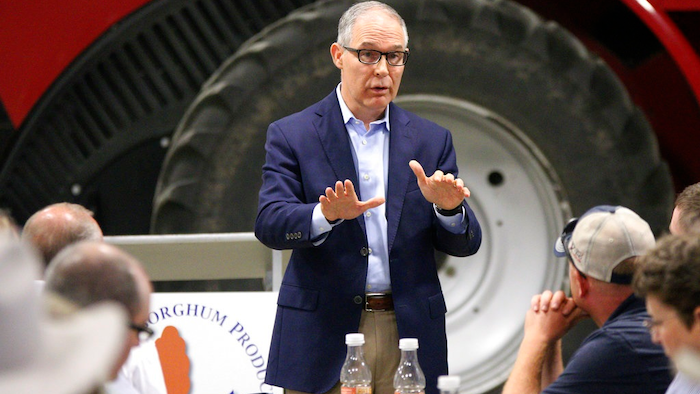 Environmental Protection Agency Administrator Scott Pruitt addresses farmers during a forum at a farm near Reliance, S.D. Farmers and ethanol producers gave Pruitt a rough reception in South Dakota, accusing him of undermining the industry that's a key part of the state's economy.
Ellen Bardash/The Daily Republic via AP

MINNEAPOLIS (AP) — Deep in the heart of Trump country, Environmental Protection Agency chief Scott Pruitt is being met with protests by farmers and ethanol producers concerned that he is undermining the industry with his strong support of oil and gas.

Their unhappiness is being broadcast on billboards, at rallies and in meetings the EPA chief is holding during a tour of heartland states, and comes as Pruitt battles a series of allegations of ethical misconduct back in Washington.

The farmers argue that Pruitt's actions have hammered demand for ethanol, hurting both ethanol and corn prices. They want Pruitt to keep President Donald Trump's promises to support the ethanol industry.

"Agriculture is not very happy with Mr. Pruitt at this point," said David Fremark, whose family grows about 11,000 acres (17.2 square miles) of corn, sorghum, soybeans and spring wheat near Miller, South Dakota.

Corn producers — some arriving in a line of tractors — timed a rally in Sioux Falls, South Dakota, on Wednesday to coincide with Pruitt's visit to a farm in central South Dakota for a private meeting with farmers. Fremark was at the meeting.

"He's done some good things, but this far and away overshadows everything he's done," Fremark said of the EPA administrator, a champion of regulation-cutting. "We're glad that he came out to hear what we have to say. But I think what we had to say fell on deaf ears. ... He's not acting like our friend."

Pruitt, a Republican and the former attorney general of Oklahoma, also met with Kansas farmers Tuesday and was touring a large ethanol plant in Nebraska on Thursday.

The farm-state trouble is adding to criticism of Pruitt from Republican lawmakers, growing numbers who already were joining Democrats in faulting the EPA head over allegations he has exploited his office for first-class travel, jobs for his wife and other perks.

Trump "made this promise on ethanol," said Sen. Chuck Grassley, an Iowa Republican, said in a telephone interview. "But Pruitt is trying to break this promise."

"We ain't going to be played for a sucker. And that's what they're trying to do," Grassley said of farm states, and oil and gas interests.

Grassley's Iowa colleague, Republican Sen. Joni Ernst, told an energy group last week that Pruitt had lied to lawmakers on the ethanol issue, and added that Pruitt was "about as swampy as you get."

South Dakota Republican Sen. John Thune praised Pruitt for talking to the farmers on their own ground, but said in a statement that Pruitt and the EPA "need to honor the commitment the president made to American farmers.'

An EPA official who'd been on Pruitt's South Dakota visit acknowledged Pruitt walked into tense meetings with farmers and ethanol producers on the matter. But "at the end of those discussions there was a sincere appreciation reflected by all in the room of the willingness to engage on these important issues and the commitment to find meaningful solutions," Mandy Gunasekara, deputy assistant administrator of the EPA's air office, said in an email.

"Decision-making is a difficult process, but instead of playing it safe and staying in Washington, Administrator Pruitt has been and continues to go out to communities impacted by the agency's decisions," Gunasekara said.

Local media said they were not told in advance of Pruitt's meetings Tuesday and Wednesday, and some initially were turned away. Reporters were allowed into a Nebraska session among Pruitt, farmers and businesspeople in Lincoln.

Farmers and ethanol producers say EPA's practice under Pruitt has been to grant more waivers to refineries that allow them to reduce how much ethanol they have to blend into gasoline, pushing down the corn and ethanol prices. That, they say, has resulted in a large decrease in demand for ethanol. The EPA says recent court decisions played a part in those changes.

They also cite the lack of action so far on Trump's promise to farmers to remove restrictions on the sale of gasoline containing 15 percent ethanol year-round across the country. The industry says they can't expand if the effective cap remains at 10 percent.

In Lincoln on Thursday, Pruitt told people gathered at the state farm bureau that he supported expanding the sale of that higher-ethanol gas year-round and would work toward it. "Right now we're in a pause period, and I hope we can hit play," Pruitt told the group. Some there praised his work at EPA.

EPA officials say final decisions on the ethanol issues are up to the White House. But farmers still blamed Pruitt.

"We've got corn prices that are at or below the price of production right now and oil companies are making record profits," said Troy Knecht, who raises corn, soybeans and alfalfa on 5,500 acres (8.6 square miles) near Houghton, South Dakota.

"Whether he and Scott Pruitt aren't communicating, we don't know. But somebody needs to be accountable for this," said Knecht, president of the South Dakota Corn Growers Association.