The categories of new orders, production and employment each fell in April for manufacturers, even though demand for manufactured goods remains robust. 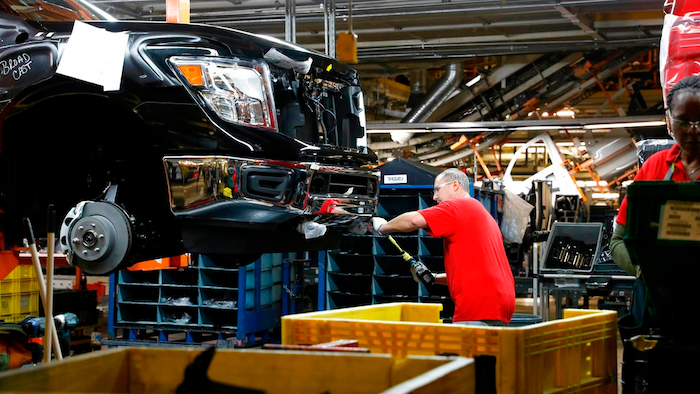 In this March 19, 2018, file photo, a technician tightens screws on the front bumper assembly at the Nissan Canton Assembly Plant, in Canton, Miss. On Tuesday, May 1, the Institute for Supply Management, a trade group of purchasing managers, issues its index of manufacturing activity for April.
AP Photo/Rogelio V. Solis, File

WASHINGTON (AP) — U.S. manufacturers say the pace of their expansion continued to slow in April, with many factories saying their output is still growing but is crimped by shortages of workers and skills.

The Institute for Supply Management, a trade group of purchasing managers, reported Tuesday that its manufacturing index fell to 57.3 percent last month from March's reading of 59.3. Any score above 50 signals growth.

The categories of new orders, production and employment each fell in April for manufacturers, even though demand for manufactured goods remains robust. Companies surveyed for the index pointed to shortages of raw materials and labor that can cause them to lose out on potential sales. A company in the food and beverage industry, for example, said shortages of trucks and drivers have affected delivery times.

The index of order backlogs continued to expand, gaining 2.2 points to 62, its highest level since May 2004. With price increases reported in 17 of 18 industry sectors, the prices index rose 1.2 points to 79.3, the highest since April 2011.

Several companies, in the metal products industry, for example, said President Donald Trump's plan to impose tariffs on imports of steel and aluminum had sparked concerns about rising prices. Some companies bought up the metals ahead of the anticipated tariffs move, driving up prices. Trump is trying to support U.S. steel and aluminum mills, though his tariffs include exemptions for allies such as Canada and Mexico.

Some companies said in the survey that the tariffs have stymied business planning.

The Trump administration announced Monday that it will take another 30 days to decide whether to slap tariffs on steel and aluminum from the European Union, Canada and Mexico, extending a period of uncertainty for businesses in those regions.

Any supply shortage and price increases could worsen further as Trump looks to impose up to $50 billion worth of tariffs on Chinese imports. That plan was in response to U.S. concerns over China stealing foreign companies' technology or forcing those companies to share their innovations in order to get access to Chinese customers. China has countered the anticipated tariffs by announcing $3 billion of additional tariffs on U.S. pork, apples and other products.