Republicans have pushed the plan for 40 years, while Democrats feel it's shameful that the provision is being published so close to Earth Day. 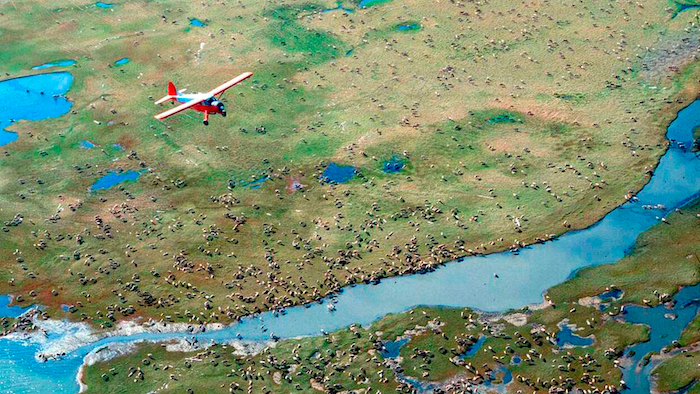 An airplane flies over caribou from the Porcupine Caribou Herd on the coastal plain of the Arctic National Wildlife Refuge in northeast Alaska.
U.S. Fish and Wildlife Service via AP

WASHINGTON (AP) — The Trump administration is moving forward on oil and gas drilling in Alaska's Arctic National Wildlife Refuge, fulfilling a longtime Republican priority that most Democrats fiercely oppose. A notice being published Friday in the Federal Register starts a 60-day review to sell oil and gas leases in the remote refuge, one of the most pristine areas in the United States and home to polar bears, caribou, migratory birds and other species.

President Donald Trump has said he "really didn't care" about opening a portion of the refuge to oil drilling but insisted it be included in recent tax legislation at the urging of others. Addressing fellow Republicans at a GOP conference in West Virginia in February, Trump said a friend told him that every Republican president since Ronald Reagan wanted to get oil drilling approved in the refuge.

"I really didn't care about it, and then when I heard that everybody wanted it — for 40 years, they've been trying to get it approved, and I said, 'Make sure you don't lose ANWR,'" Trump said. President Bill Clinton vetoed a GOP plan to allow drilling in the refuge in 1995, and Democrats defeated a similar GOP proposal a decade later.

The plan being published Friday starts a 60-day environmental review that includes public meetings in Anchorage, Fairbanks and other sites, including three in northern Alaska. Assistant Interior Secretary Joe Balash called the drilling plan "an important facet for meeting our nation's energy demands and achieving energy dominance" and said he looks forward to visiting Alaska communities most affected by the plan.

The state's all-Republican congressional delegation welcomed the move as a step "to responsible energy development." Democrats and environmental groups denounced the plan and said it was "shameful" that it would be published on Earth Day — and on the eighth anniversary of the BP oil spill in the Gulf of Mexico, the nation's worst environmental disaster.

"The Trump administration's reckless dash to expedite drilling and destroy the Arctic National Wildlife Refuge will only hasten a trip to the courthouse," said Jamie Rappaport Clark, president of Defenders of Wildlife. "We will not stand by and watch them desecrate this fragile landscape."

Washington Sen. Maria Cantwell, top Democrat on the Senate Energy and Natural Resources Committee, called drilling "fundamentally inconsistent" with the refuge's purpose. "Ignoring that reality and hurtling toward a pre-determined outcome is a recipe for disaster and a massive waste of taxpayer dollars," she said.

The Trump administration and congressional Republicans said the drilling plan would help pay for tax cuts approved by Congress and signed by Trump in December. GOP lawmakers project at least $1 billion in revenue from drilling leases over 10 years. Environmental groups and other critics call those projections wildly optimistic, saying low global oil prices and high exploration costs are likely to limit drilling revenue.

The administration plan calls for at least two major lease sales over the next decade in at least 400,000 acres (625 square miles) each in the refuge's coastal plain. Surface development would be limited to 2,000 acres (three square miles).

Consumer groups and federal employee unions are asking the government to stop using and re-selling vehicles with unrepaired safety recalls.
Apr 16th, 2021
Follow Us
Most Recent