The last train car full of NYC sewage sludge that stunk up a small Alabama community for more than two months has finally been emptied. 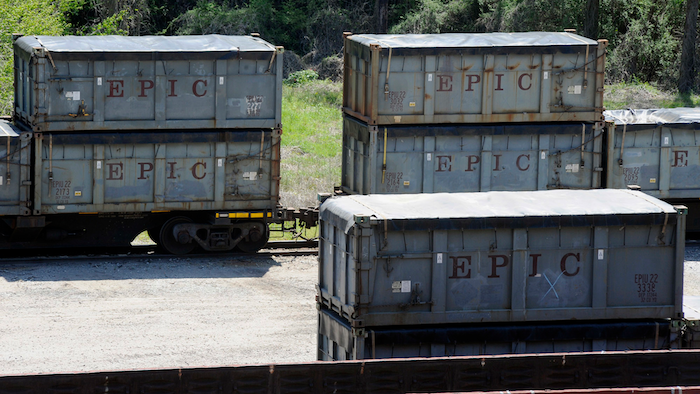 This photo shows containers that were loaded with tons of sewage sludge in Parrish, Alabama.
AP Photo/Jay Reeves

ATLANTA (AP) — The last train car full of New York City sewage sludge that has stunk up a small Alabama community for more than two months has finally been emptied, the town's mayor said this week. For more than two months, the sludge has blown an unbearable stench throughout the tiny town of Parrish, Alabama, population 982.

All of the containers have now been emptied from the so-called Poop Train, Parrish Mayor Heather Hall said on social media Wednesday. Some of the containers are still at the site, awaiting shipment back to the northeast U.S., she said. The sludge is a byproduct of New Yorkers' excrement. It was shipped to the nearby Big Sky landfill. Hall said after a public outcry, the Norfolk Southern railroad required Big Sky to hire more truck drivers so the sludge could be removed from the train cars more quickly.

"Other towns and cities have been fighting this material in their towns for years," Parrish said in announcing the end of what she described as a nightmare. "While what happened in Parrish was, to our understanding, an unprecedented event, there are still small towns like Parrish fighting this situation on a smaller scale."

Experts say some cities send their waste to Alabama and other Southern states due to low landfill fees and lax zoning laws. New York has discontinued shipments to Alabama for now. New York City has a goal of sending "zero waste" to landfills by 2030, according to its long-term strategy "One New York: The Plan for a Strong and Just City."

Environmental advocates say there's nothing just about a city dumping waste in poor communities that lack the political clout to stop it. In Alabama, residents of tiny Parrish say they felt blindsided by the sudden horrid smells that enveloped their town in late January. "Would New York City like for us to send all our poop up there forever?" said Sherleen Pike, who lives about a half-mile from the railroad track in Parrish. She's been dabbing peppermint oil under her nose because the smell is so bad.

It has become more challenging and costly for New York City to dispose of its sewage sludge in recent years, city documents show. New York was forced to find new methods after the federal government in 1988 banned the city's longtime practice of dumping it in the ocean.

In recent years, New York City contractors had dumped the waste at landfills relatively close to the city, but those landfills have significantly reduced the amount of waste they will accept, according to a city budget document. Sending it to other communities also has prompted complaints about the smell. Two landfills in Pennsylvania, for instance, quit accepting sludge from New York City after odor complaints and violations, according to the documents.

New York City projects higher disposal costs through fiscal year 2020, partly because the waste will have to be transported farther away from the city. In her Facebook post announcing that the last container of sludge had been removed, Hall remarked, "This material does not need to be in a populated area ... period."

"It greatly diminishes the quality of life for those who live anywhere near it."

New York to Give $10M Boost to Clean Energy Companies