It has taken 30 years of conservation efforts by biologists and volunteers in both countries as well as tequila producers and agave growers in Mexico to rebuild a healthy population. 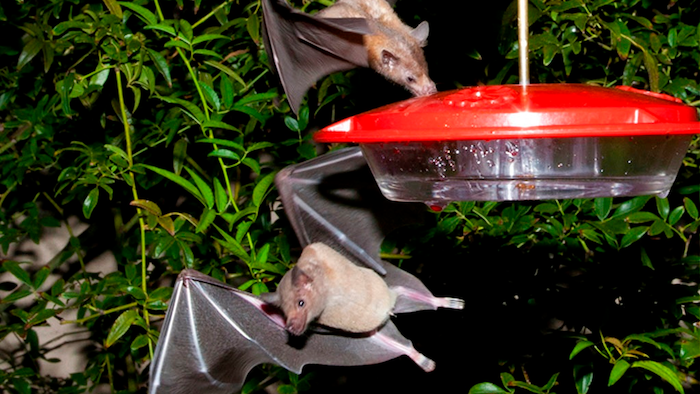 This 2013 file photo provided by the U.S. Fish and Wildlife shows nectar-feeding lesser long-nosed bats attracted to a hummingbird feeder during a citizen science bat migration monitoring project in southern Arizona. Wildlife managers in the American Southwest say a once-rare bat important to the pollination of plants used to produce tequila has made a comeback and is being removed from the federal endangered species list.
Richard Spitzer/U.S. Fish and Wildlife via AP, file

ALBUQUERQUE, N.M. (AP) — Wildlife managers in the American Southwest say a once-rare bat important to the pollination of plants used to produce tequila has made a comeback and is being removed from the U.S. endangered species list.

The U.S. Fish and Wildlife Service's announcement Tuesday made the lesser long-nosed bat, which ranges from Mexico to southern Arizona and New Mexico, the first bat ever removed from the nation's list of threatened and endangered species.

The decision comes a year after first being proposed and three years after Mexico delisted the animal, which depends on the nectar of agaves, cactuses and other flowering plants.

It has taken 30 years of conservation efforts by biologists and volunteers in both countries as well as tequila producers and agave growers in Mexico to rebuild a healthy population.

There were once thought to be fewer than 1,000 lesser long-nosed bats in 14 known roosts throughout the region. Now, there are about 200,000 of the nectar-feeding animals and dozens of roost sites.

With the population trending upward, regional officials with the Fish and Wildlife Service say the science shows threats to the bat have been eliminated or reduced to the point where they can consider the species recovered.

In Mexico, tequila producers who rely on agaves are integrating more harvest and cultivation practices in recognition of the bats being key pollinators. Some are marketing "bat-friendly tequila."

In southern Arizona, residents for a decade have monitored bats' nighttime use of hummingbird feeders. It provided biologists with a clearer understanding of migration timing and allowed for the opportunity to capture bats and affix radio transmitters that aided in finding roost sites.

Scientists and state wildlife managers describe the delisting as a conservation success that resulted from decades of work.

"The story of the lesser long-nosed bat shows that conservation and science can work together to provide species the chance to recover and persist," Winifred Frick, chief scientist at Bat Conservation International, said in a statement.

To ensure the bats continue to thrive, the Fish and Wildlife Service is preparing a monitoring plan that will focus on roosting sites and availability of forage.

Federal land managers in New Mexico and Arizona, including at the U.S. Army's Fort Huachuca, already are including forage plants such as agaves, saguaros and other cactuses in their resource management plans to help the species.

Limiting human access to caves with roost sites and abandoned mines in the U.S. also has benefited bat populations.

Recovery efforts have included education aimed at changing attitudes about bats and improving identification of different species. Historically, the lesser long-nosed bat was a victim of campaigns to control vampire bats over rabies concerns and their effects on livestock.

In reviewing the species, biologists considered the potential effects that climate change may have on the "nectar trail" that the bats follow as they migrate. They say the bat is flexible and adaptive enough to remain viable under changing conditions.