The incident resulted in the deaths of five people. 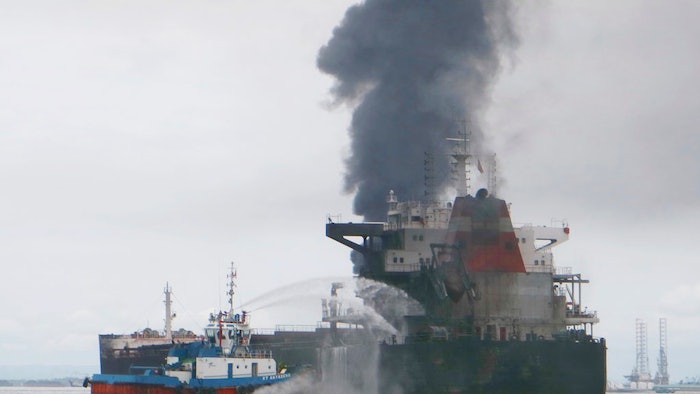 In this Saturday, March 31, 2018, photo, a tug boat tries to extinguish fire from a burning oil tanker in Balikpapan, Indonesia. Waters off an Indonesian port city reek like a gas station after an oil spill and fire that killed four people over the weekend, an official said Wednesday, April 4.
AP

JAKARTA, Indonesia (AP) — An oil spill that caused a fire that killed five people and sickened hundreds in an Indonesian port city came from a broken pipe the state-owned energy company was using to transfer crude oil, police said Thursday.

A preliminary investigation had identified the leaking substance as marine fuel oil, but East Kalimantan police spokesman Ade Yaya Suryana said the latest sample confirmed it was crude oil from a pipe laid on the seabed and owned by state oil and gas company Pertamina.

The oil leaking from the broken steel pipe caused a fire at a fishing boat and a ship carrying coal at its stern Saturday. Four people were confirmed killed earlier, and rescuers found another body of a missing person late Wednesday.

Balikpapan city secretary Sayid Fadli said Wednesday the waters offshore reeked like a gas station and the city on the island of Borneo was in its third day of a state of emergency following the weekend spill around Semayang Port.

"We have warned workers and residents around the bay to refrain from lighting cigarettes and make safety the priority," Fadli said.

The city has distributed masks, and more than 1,300 people have suffered breathing problems, nausea and vomiting.

Suryana said the cause of the broken pipe was still being investigated, but local media cited Pertamina as saying the pipe had been dragged out of position so far it broke.

Togar M.P. Manurung, Pertamina's Refinery Unit general manager, was quoted in the The Jakarta Post as saying the pipe had been shut to prevent further leaks and the firm was still trying to discern how much oil had spilled into the bay.

The port authority was working with Chevron Indonesia and Pertamina to clean up the spill, Fadli said.