Hawaii has experienced the downside to a low unemployment rate. 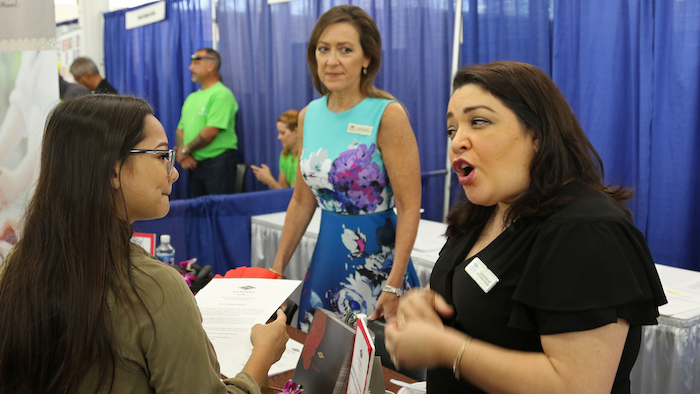 HONOLULU (AP) — Are there downsides to a low unemployment rate? In Hawaii, which has the United States' lowest jobless rate at a minuscule 2.1 percent, the answer is yes.

Employers are frustrated by their inability to find workers. And unfilled jobs may be slowing the state's economic growth.

A low unemployment rate is certainly better than a high one. And many employers are responding to the worker shortage by offering higher pay.

Still, Hawaii's experience serves as a cautionary tale for the nation as a whole: Low unemployment can mask underlying problems. Nationwide, the jobless rate is at a 17-year low of 4.1 percent, and economists forecast it could drop another half-point by next year. That would bring the rate to a half-century low.

U.S. employers are already complaining about their struggles to find qualified employees. The number of open jobs nationwide reached the highest level on record in January.

Like the rest of the country, Hawaii has an aging population, and its unemployment rate has been held down in part by retiring baby boomers.

The state also has unique challenges, such as an economy long dominated by tourism. Many of Hawaii's available jobs are in the service sector and don't pay enough to cover the state's high housing costs. And economists say Hawaii's ongoing economic sluggishness could make it harder for the state to pay its public pension obligations in the future, and fund highways and other expensive infrastructure.

U.S. Rep. Colleen Hanabusa, a Democrat, cited the deceptively rosy jobless rate when she launched her campaign challenging a sitting governor from her own party in this year's election.

"We cannot wait as more and more of our young people, discouraged by the future they see for themselves here, leave Hawaii in hopes for better opportunities on the mainland," Hanabusa said in January. A recent poll conducted for the Honolulu Star-Advertiser gave her a 20-percentage point lead over Gov. David Ige in the August primary.

Hanabusa was pointing to a trend reflected in census data: People are moving away from Hawaii even as employers here clamor for workers.

Last year, the state suffered a net loss of more than 1,000 people. On Oahu, home to Honolulu and major military installations like Pearl Harbor, the population declined an average of 11 people per day. The median price of an Oahu home tops $770,000.

According to the U.S. Census Bureau, 47 percent of Hawaii's residents spend more than a third of their monthly income on rent. That's greater than any other state. About one-quarter of renters put half of their income toward housing.

The personnel squeeze is forcing employers to offer incentives to attract workers.

Maui Divers Jewelry, a retailer in the old whaling town of Lahaina, offers employees extra money to cover the cost of driving to its stores from Maui's bigger cities.

Star of Honolulu Cruises and Events has raised the hourly wage for servers on its boat cruises to $12 from $10.

"They can be picky now, I feel like. The ball is in their court," Sheridan Andres, the company's human resources manager, said of job applicants. Star of Honolulu is also advertising for kitchen staff, boat maintenance workers, bus drivers and supervisors.

Hawaii Pacific Health, one of the state's largest health care providers, is pursuing a pilot program to train medical assistants at five public high schools so they'll be ready to walk into jobs when they graduate. The company has 7,000 employees, along with 44 openings for medical assistants and more than 400 openings overall.

The demand for labor is driven by a tourism surge that brought a record 9.4 million visitors to the islands last year. Strong hiring and income gains in the Western U.S. mean more Americans can make the trip. And Japan and Canada, where most of the state's overseas visitors come from, also are experiencing solid growth.

That's led to an increase in low-paying hotel and restaurant jobs, which accounted for 60 percent of Hawaii's job growth in 2017, according to data compiled by Moody's Analytics. Hotels and restaurants employ about one of every five workers in the state, double the proportion in the rest of the U.S.

Adam Kamins, a senior economist at Moody's Analytics, says the state has had little success in luring better-paying tech jobs from western states such as California or Washington, because of high housing and business costs. Tech firms are instead moving to cheaper states such as Utah, Colorado and Idaho.

An economy with an unemployment rate as low as Hawaii's should be growing about 3 percent a year, said Eugene Tian, the state's chief economist. Instead, it's growing at about 1.5 percent.

Paul Brewbaker, an economist with consulting firm TZ Economics, said Hawaii's growth rate has lagged the nation's for the past decade. On average, Hawaii's economy has grown just 1.6 percent per year compared with the national average of 2.1 percent since 2009.

On a per-capita basis, gross domestic product in Hawaii was one-third higher than the national average 40 years ago, Brewbaker said. It's now the same. The trend could have profound consequences for Hawaii in the long term.