Referring to the wild swings in the stock market, Powell said the Fed does "not see these developments as weighing heavily on the outlook for economic activity."

Martin Crutsinger
In this Nov. 28, 2017, file photo, Jerome Powell, President Donald Trump's nominee for chairman of the Federal Reserve, sits in the audience before being called to testify during a Senate Banking, Housing, and Urban Affairs Committee confirmation hearing on Capitol Hill in Washington. Powell testifies to Congress on Tuesday, Feb. 27, 2018, in his first public appearance as chairman of the Federal Reserve.
AP Photo/Carolyn Kaster, File

He said that bright prospects for growth and employment will allow the Fed to continue raising its key policy rate at a gradual pace. The Fed boosted its benchmark rate three times last year and has signaled that it expects to raise rates another three times in 2018.

In a prepared statement, Powell praised Janet Yellen for the important contributions she made during her four years as the first woman to lead the Fed. He said the two had worked together to ensure "a smooth leadership transition and provide for continuity in monetary policy."

Referring to the wild swings in the stock market that occurred earlier this month, Powell said the Fed does "not see these developments as weighing heavily on the outlook for economic activity, the labor market and inflation."

Powell, who took office on Feb. 5, was tapped last November as the new Fed leader after President Donald Trump decided against offering Yellen a second term. Powell, a Republican, has been on the Fed's seven-member board since 2012.

The Fed has raised its policy rate by a quarter-point five times starting December 2015. Before then, it had kept its policy rate at a record low near zero for seven years in an effort to help the country recover from the deepest recession since the 1930s. Even with the recent hikes, the rate remains at a still-low 1.25 percent to 1.50 percent. But various market rates, including home mortgage rates, have begun rising in anticipation of further Fed rate increases.

Many economists believe the Fed, which last raised rates in December, will hike again at its next meeting in March and some analysts think the Fed could hike more than three times this year, depending on what inflation does.

Investors have begun to worry that the Fed might accelerate the pace of its credit tightening if inflation, which has been dormant for years, starts to show signs of accelerating. The recent market turmoil was triggered by a report that wages for the 12 months ending in January had climbed at the fastest pace in eight years, raising concerns that inflation pressures could be growing.

In his comments, Powell did not express worries that the economy was starting to overheat, stressing instead a number of developments showing economic strength.

Some economists have raised concerns that recent moves by the Trump administration and Congress to boost economic growth through $1.5 trillion in tax cuts and increased government spending could cause the Fed to worry about overheating and inflation.

But Powell said that the government's fiscal policy was now "more stimulative," which would help to boost inflation, which has been chronically low in recent years. He said that the Fed expected inflation to move up this year and then stabilize around the Fed's 2 percent target.

Powell was delivering the Fed's semi-annual monetary report and testimony to Congress, appearing before the House Financial Services Committee on Tuesday and the Senate Banking Committee on Thursday.

During her four years as Fed leader, Yellen often received a rough reception from Republicans in the House who believed the Fed, through the extraordinary measures it used to combat the 2008 financial crisis and the deep recession that followed, had grown too powerful and too independent. To impose more control, House GOP lawmakers pushed legislation that would require the Fed to follow a specific monetary rule in setting interest rates.

Yellen objected, arguing that the economy was too complicated to use a single rule to set interest rates. Powell has also voiced his opposition to a strict monetary rule but in his testimony he noted that the Fed "routinely consults monetary policy rules" to use as guidelines in setting policy.

"Personally, I find these rule prescriptions helpful," he said, while noting that careful judgments were still required in assessing the variables that go into the various rules. 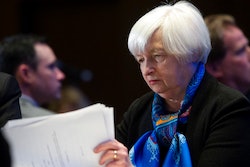