The company says it hasn't had to pay this tax since the Prohibition era. 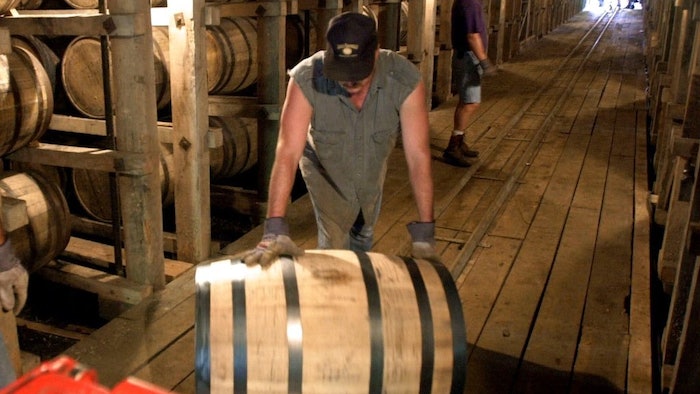 In this June 29, 2000, file photo, Tracy Matlock, left, and David Culpepper, right, move barrels of Jack Daniel's whiskey from one of the warehouses at the famous distillery in Lynchburg, Tenn. Jack Daniel's is turning to state lawmakers to ensure that distillers aren't subject to property tax on whiskey barrels in Tennessee, which the company says it hasn't had to pay since at least the end of Prohibition eight decades ago.
AP Photo/John Russell, File

NASHVILLE, Tenn. (AP) — Jack Daniel's is turning to state lawmakers to ensure that distillers aren't subject to property tax on whiskey barrels in Tennessee, which the company says it hasn't had to pay since at least the end of Prohibition eight decades ago.

The whiskey giant is pushing a liquor barrel property tax exemption bill after an auditor for Moore County's property assessor recently determined the company's barrels are taxable. Paying that tax on around 2 million barrels would cost the Lynchburg, Tennessee-based company an additional $2.8 million this year, according to a legislative fiscal review.

Ralph Cooper, a lobbyist for the Tennessee County Services Association, said the audit determined that Jack Daniel's has not been self-reporting the barrels for personal property tax, as required.

But Jack Daniel's contends that the barrels aren't taxable because they aren't equipment, they are part of the inventory. The barrels are sold and reused, often to age other spirits across the world. The state attorney general has been asked for an opinion on whether the barrel tax would be constitutional. Jack Daniel's argues it isn't.

Last week, Jack Daniel's master distiller Jeff Arnett told a panel of lawmakers that the company isn't looking to save money; it's looking to avoid what amounts to a new tax on a growing, competitive and highly taxed industry in Tennessee.

About 60 percent of the retail price customers pay for distilled spirits is due to taxes, Arnett said. And about half of Moore County's operating budget comes from Jack Daniel's, he added.

"For Jack Daniel's, you could look at it and say, 'Well, maybe we can afford to pay that,' but this is an industry tax," Arnett said in an interview. "And you have 30-plus distilleries (in Tennessee), some of them who have got their homes mortgaged to try to make a go of it."

The Jack Daniel's audit appears fall under a state rule that calls for random audits and allows extra emphasis on accounts that are major, non-reporting, have significant changes or are suspected of improper reporting. A handful of other distillers said they have recently been asked for whiskey barrel counts as well.

Cooper, the counties association lobbyist, countered that the tax has "been here for years."

"Here's where the problem comes in. Somebody says, 'This is a new tax on me' when they get audited," Cooper said at a legislative meeting last week. "Personal property tax in the state of Tennessee is on a volunteer reporting basis."

Tennessee's assessors of property are also opposing the bill because an appeals process exists for tax assessments, although Jack Daniel's says an appeal would require expensive legal fees and take years.

Kris Tatum, president of Tennessee Distillers Guild, said he polled the group's members and none have ever been assessed the tax, contradicting a legislative fiscal analysis of the bill that says five counties are assessing it.

Bill sponsor Rep. David Alexander has made the case that the tax would go against a section of the state Constitution that says: "No article manufactured of the produce of this state, shall be taxed otherwise than to pay inspection fees."

"What is happening right now, it is some kind of backdoor, constitutionally suspect process to put ever more taxes on job creators and entrepreneurs," Alexander, a Winchester Republican, said at last week's hearing.