Sony's board members said they were surprised the former CEO, Kazuo Hirai, wanted to step down. 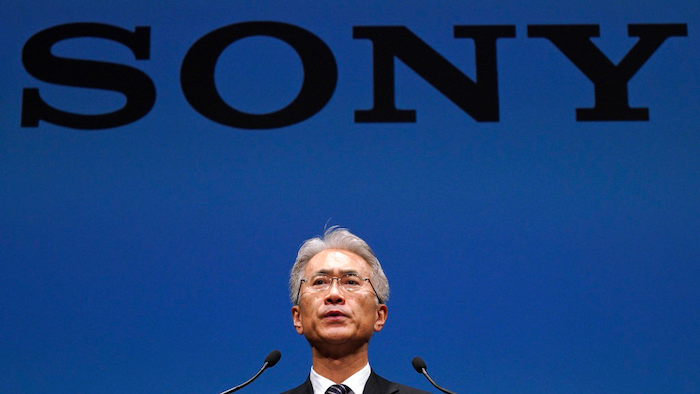 Sony Corp. new President Kenichiro Yoshida speaks at a press conference at the company's headquarters in Tokyo Friday, Feb. 2, 2018. Sony Corp. named Chief Financial Officer Yoshida as its new president and CEO on Friday, replacing Kazuo Hirai, who led a turnaround at the Japanese electronics and entertainment company and will stay on as chairman.
AP Photo/Eugene Hoshiko

TOKYO (AP) — Sony Corp. named Chief Financial Officer Kenichiro Yoshida as its new president and CEO on Friday, replacing Kazuo Hirai, who led a turnaround at the Japanese electronics and entertainment company and will stay on as chairman.

Yoshida has experience in Sony's U.S. operations, as well as its network, financial and investor relations businesses. Yoshida and Hirai shook hands, appearing together before reporters at Sony's Tokyo headquarters.

Hirai stressed Yoshida will continue the path he had set in place. Sony is about to record its best results in two decades this fiscal year. And both said management must not grow complacent.

"His way of thinking on what Sony must do is similar to mine," Hirai said on why Yoshida was chosen.

Sony's board members said they were surprised Hirai wanted to step down. But Hirai said he decided the timing was right to "pass the baton" to the next leadership, although the choice appeared to indicate the company's determination to stay on track, rather than shift too quickly to a younger generation of leadership. Yoshida, at 58, is one year older than Hirai.

Hirai became president and CEO in 2012, taking over from Howard Stringer, an American. He turned around an embattled Sony, which had sunk into losses as its once prized TV business lost out to rivals such as Samsung Electronics Co. of South Korea. Sony is now headed to booming profits, outpacing company targets, as its sensors are in demand for mobile devices made by rivals, including Apple.

"It excites me to hear more and more people enthuse that Sony is back again. As the company approaches a crucial juncture, when we will embark on a new mid-range plan, I consider this to be the ideal time to pass the baton of leadership to new management, for the future of Sony and also for myself to embark on a new chapter in my life," Hirai said of the company's three-year plan set to start in April.

Yoshida, who also served as executive deputy president, acknowledged he was taken aback when he learned about his new job late last year. But he promised to maintain a "sense of crisis," realize solid profits and growth to stay globally competitive. He said Sony still had a long way to go to become a top global technology company.

Hirai has had a difficult task of juggling the widespread operations of Sony, including household appliances, medical equipment and video game machines, as well as movies, financial services and music. It was hard to make sure every sector was profitable.

But Hirai always stressed the importance of Sony's roots, pointing to how Sony brought the world portable music players like the Walkman, the reel-to-reel tape recorder and other gadgets that went on to pioneer entire sectors because of what he described as an exciting emotional appeal.

Sony was founded in 1946 by Akio Morita and Masaru Ibuka as Japan was reconstructing from the destruction of World War II. Their dream had always been to climb to global success.

In its pictures division, global reception was favorable for "Jumanji: Welcome to the Jungle," as well as on-demand TV sales for "The Crown," according to Sony.

Also helping lift results were the absence of losses that had hurt results before, such as the damage from an earthquake in Kumamoto in southwestern Japan in 2016. A favorable exchange rate also helped. A weak yen is a boon to Japanese exporters like Sony. Sony raised its net profit forecast to 480 billion yen ($4.4 billion) for the fiscal year through March, up dramatically from the 73 billion profit it recorded the previous fiscal year.

"We must stay close to creators," Yoshida said, stressing the importance of content and innovation. "That is the direction Sony must go."