Qualcomm Fined for Paying Apple to Use its Microchips

Payments were made by reducing prices on Qualcomm components for iPhones and iPads. 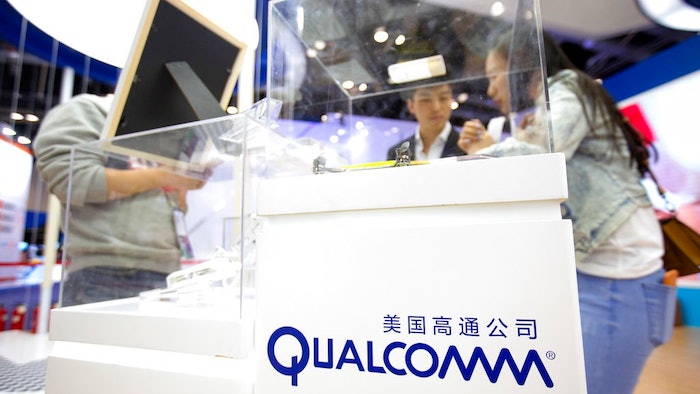 In this Thursday, April 27, 2017 file photo, visitors look at a display booth for Qualcomm at the Global Mobile Internet Conference (GMIC) in Beijing. The European Union is slapping a $1.23 billion fine on U.S. chipmaker Qualcomm for abusing its market dominance in the lucrative sector of vital components in smartphones and tablets.
AP Photo/Mark Schiefelbein, File

BRUSSELS (AP) — The European Union on Wednesday slapped a $1.23 billion fine on U.S. chipmaker Qualcomm for abusing its market dominance in the lucrative sector of components in smartphones and tablets for half a decade.

EU Commissioner Margrethe Vestager said that San Diego-based Qualcomm "illegally shut out rivals from the market" for more than five years by paying key customer Apple to not use chips made by Qualcomm's rivals.

Vestager said Qualcomm paid "billions of dollars" to Apple and in the process helped establish itself as the dominant force.

She said the payments were made in part by reducing prices for Apple to buy Qualcomm components on condition that Apple iPhones and iPads would exclusively use Qualcomm chips.

The EU said that the abuse happened between 2011 and 2016 and centered on baseband chipsets that allow smartphones and tablets to connect to cellular networks. Over most of that period, Qualcomm accounted for over 90 percent of the market.

Apple was a dominant player with its iPad and iPhones and the two companies twice entered an agreement that cut out rivals.

Vestager said there were no regulatory repercussions for Apple despite accepting the system for the best part of six years. She said she had internal documents showing Apple considered switching some of its work to Intel but could not do so financially until the end of the agreement.

Only when the deal was about to expire did Apple start to diversify. "Competition in this market is now on the up," Vestager said.

Qualcomm issued a statement saying it "strongly disagrees with the decision and will immediately appeal." It said that the EU move did not affect its ongoing operations.

In a warning to others, Vestager said "don't go there" and the fine of 997 million euros is meant to be a deterrent. She said it amounted to almost five percent of annual turnover.

"It is reflecting the fact that it is very illegal behavior. It went on for quite some time."

She said Qualcomm used the system to establish the company as the industry's chipmaker of choice. She said that if smaller companies see a big firm like Apple using Qualcomm chips, they would be more likely to do so as well.

"In particular it has made a difference because we are talking about the one of the biggest and most important customers in this market," Vestager said.