GE Pays $15B for Past Mistakes

Investors had known that the problems would result in a financial hit to GE since last year, but magnitude turned out to be about five times more than had been anticipated. 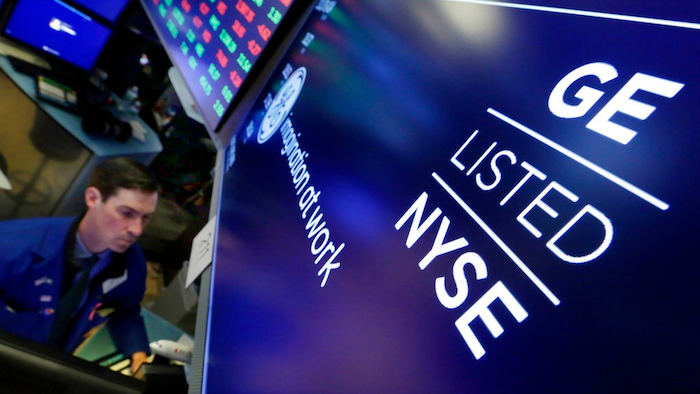 Specialist John McNierney works at the post that handles General Electric on the floor of the New York Stock Exchange, Tuesday, Jan. 16, 2018. GE CEO John Flannery, who was put in charge of reviving the company last summer, revealed significant issues at GE Capital on Tuesday, which will lead to a $6.2 billion after-tax charge in the fourth quarter.
AP Photo/Richard Drew

SAN FRANCISCO (AP) — General Electric Co. will pay $15 billion to make up for the miscalculations of an insurance subsidiary as a new regime weighs future changes that could culminate in a breakup of a company conceived in the industrial age.

The setback announced Tuesday is rooted in North American Life & Health, a part of the company's GE Capital division that helps cover the risks assumed by insurers that sell policies to consumers.

North American Life stopped writing new policies in 2006, but before that it reinsured about 300,000 policies covering the long-term health care of people in the final years of their lives.

The insurer underestimated how much it would cost to pay for the care of people who lived longer than projected, a mistake that was magnified when the low interest rates of the past decade curtailed the investment returns on the policy premiums.

To make up for the shortfall, GE Capital will divert $15 billion into North American Life through 2024. In the shorter term, GE will take a $6.2 billion charge on its fourth-quarter earnings, which will be announced later this month. GE Capital will also stop paying billions of dollars to its corporate parent, which was founded 126 years ago and is now based in Boston.

Investors had known that the problems in North American Life would result in a financial hit to GE since last year, but magnitude turned out to be about five times more than had been anticipated, said RBC Capital Markets analyst Deane Dray.

GE's stock fell 55 cents, or nearly 3 percent, to close at $18.21 Tuesday. The downturn probably would have been more severe if Flannery had not hinted that GE might take the radical step of splitting up the main company's three main components — aviation, health care and power — into separate businesses.

In a Tuesday conference call, Flannery told analysts that there has been an ongoing review of about how to wring the most value from GE's disparate businesses since he succeeded Jeffrey Immelt as the company's CEO five months ago. "All options on the table, no sacred cows," Flannery said during the call.

GE born in 1892, already has shrunk dramatically since it became entangled in the financial crisis a decade ago, and Flannery has previously vowed to shed business units worth more than $20 billion over the next year or two.

Many investors have been clamoring for GE to take drastic measures, given the company's stock has lost half its value during the past decade. The Dow Jones industrial average, which consists of GE and 29 other companies, has more than doubled during the same span.

"At this stage, business as usual isn't working" for GE, Dray said.

Breaking up a sprawling company like GE would be extremely complicated, and likely take several years to complete. In the past, GE has spun off its stakes in subsidiaries such as Synchrony Bank in stages, a strategy that it might deploy if it pursues a broader breakup.

William Blair analyst Nicholas Heymann doubts GE will be able to sell or spin off too many businesses until Flannery can clean up some of the messes that he inherited.

GE is "a company starting the process of doing a lot of heavy lifting," Heymann said. "The main job now is to eliminate uncertainty to assure GE's return to health."

Driverless Cars to Bring $81B in Insurance Premiums