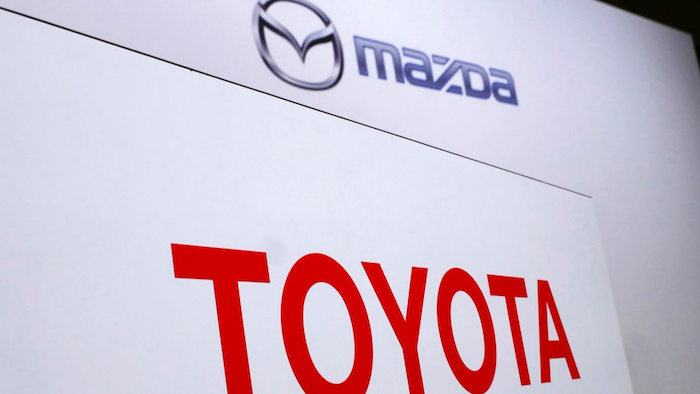 In this Aug. 4, 2017, file photo, logos of Toyota Motor Corp., bottom, and Mazda Motor Corp., top, are placed prior to a news conference in Tokyo. Japanese automakers Toyota and Mazda have picked Alabama as the site of a new $1.6 billion joint-venture auto manufacturing plant, a person briefed on the decision said Tuesday, Jan. 9, 2018.
AP Photo/Eugene Hoshiko, File

DETROIT (AP) — Japanese automakers Toyota and Mazda have chosen the state of Alabama for a $1.6 billion joint-venture auto plant that is to begin operating by 2021 and eventually employ about 4,000 people, a person briefed on the decision said.

The manufacturing plant is to be built in the Huntsville area in Limestone County, said the person, who asked to remain anonymous because the site hasn't been officially announced. Officials in the Southern state said Alabama Gov. Kay Ivey is to make a major economic development announcement on Wednesday, but they declined to elaborate.

Alabama and North Carolina apparently were finalists for the huge factory, which is expected to begin operating in 2021. It is to be able to build 300,000 vehicles per year and will produce the Toyota Corolla compact car for North America and a new small SUV from Mazda, the companies have said.

Toyota and Mazda are forming a capital alliance and splitting the cost for the plant equally. The Huntsville area already has a Toyota engine factory that employs nearly 1,500 people. The decision to pick Alabama is another example of foreign-based automakers building U.S. factories in the South. The companies have located there due largely to lower wages and to avoid the United Auto Workers union, which is stronger in Northern states.

After reassessing the market, Toyota Motor Corp. has changed its plan to make Corollas at a plant in Guanajuato, Mexico, now under construction, and instead will produce Tacoma pickups there, Toyota has said.

President Donald Trump had criticized Toyota for taking auto production and jobs to Mexico. With the investment, both automakers hope to prove their good American corporate citizenship and appease the Trump administration's concerns about jobs moving overseas.

But during the summer, Toyota President Akio Toyoda denied that Trump's views influenced his decision.

"We have been reviewing the best production strategy for our business," he told reporters in Tokyo at the time.

Toyota and Mazda Motor Corp. also plan to work together on various advanced auto technology, such as electric vehicles, safety features and connected cars, as well as products that they could supply each other, they said.

It's difficult to predict auto sales in three years, but at present, Toyota may not need the factory for Corolla production.

U.S. sales of small cars fell nearly 10 percent last year as buyers continued a massive shift toward SUVs and pickup trucks. Corolla sales fell 14 percent for the year, to just under 309,000, according to Autodata Corp.

Still, Toyota and Mazda have said their collaboration will respect mutual independence and equality. Toyota, which makes the Prius hybrid, Camry sedan and Lexus luxury models, already provides hybrid technology to Mazda, which makes compact cars for Toyota at its Mexico plant.

The sheer cost of the plant also makes a partnership logical, as it boosts cost-efficiency and economies of scale. Working together on green and other auto technology also makes sense as the segment becomes increasingly competitive due to concerns about global warming, the environment and safety.

Indiana Out of Toyota-Mazda Consideration