A federal judge ordered the ash excavated and removed, because it's leaking pollutants. 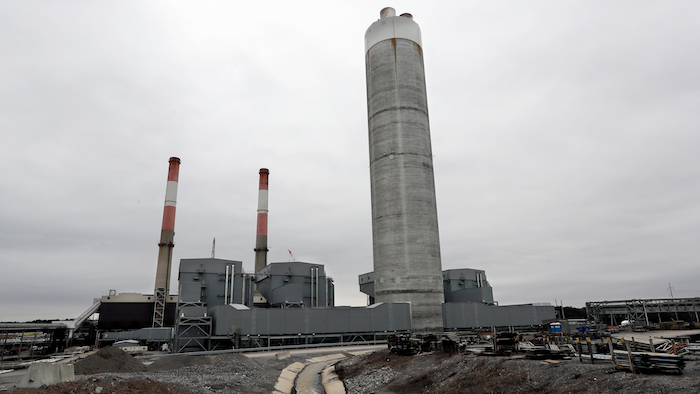 The state also believes the Tennessee Valley Authority might save money by following the court's order at Gallatin Fossil Plant. That's because the other option — leaving 11 million cubic yards (8 million cubic meters) of ash in unlined pits and putting a cap on them — could fail to stop pollution and require future cleanup, according to a consultant's analysis for the state obtained through a public records request.

The utility says it's taking steps to follow the court's cleanup requirement, even as it pushes to get the order struck down on appeal. The state has a separate, ongoing lawsuit against the Tennessee Valley Authority over pollution at Gallatin, about 40 miles (65 kilometers) from Nashville.

"Like the federal court, we have concerns that the coal ash pond is susceptible to sinkholes and currently leaking heavy metals into the groundwater," said Tennessee Department of Environment and Conservation spokesman Eric Ward.

In August, a federal judge ordered the ash excavated and removed, saying it's leaking pollutants into the Cumberland River in violation of the Clean Water Act and poses risks while it remains where it is. But the judge said there was scant evidence of harm caused by the pollution so far.

The utility has contended capping the waste where it sits would be less expensive and avoid a possible larger spill from moving the ash. But capping the ash isn't an option under the court order.

The Department of Environment and Conversation says it is exploring the idea of digging up and dumping ash into a lined landfill at Gallatin.

The utility's timeline says it will take 24 years to move the ash to an onsite landfill. It wouldn't start moving the ash for at least 6 ½ years, including 4 ½ for permitting, according to a court filing by the Southern Environmental Law Center, which represents one of the environmental groups that sued the utility.

An affidavit by a state regulator says the Tennessee Valley Authority would only have to modify the permit for its current landfill to expand it, not seek a new permit; additionally, it likely wouldn't take 4½ years, considering processing the existing landfill's permit only took two years. The affidavit by state solid waste management regulator C. Jason Repsher also says the utility wouldn't have to wait to start storing dug-up coal ash in the landfill.

Utility spokesman Scott Brooks said choosing a landfill location, offsite or onsite, will be a "significant driver" of the timeline. Either solution requires a state permit, Brooks said.

"TVA remains committed to protecting human health and the environment in everything it does because it's the right thing to do, not based on narrow agendas," Brooks said.

The Southern Environmental Law Center has pointed to new water sampling as proof the utility needs to start moving ash as soon as possible.

A court filing by the environmental group says new data further show there is a significant underground river that allows pollution to flow from the coal ash ponds into the Cumberland River, including an arsenic level along the riverbank that exceeded state limits by more than 61 times.

Brooks, the utility spokesman, said available information indicates that contamination isn't leaving the plant site at levels harmful to people or the environment.

The utility also has warned that ratepayers, including about 9 million customers in parts of seven Southern states, would face higher rates. The utility initially said the project would cost $2 billion, but newer estimates factoring in an onsite landfill range below $1 billion.

The analysis prepared for the state says substantial rate increases shouldn't be necessary because the utility's annual costs would be very modest. The most they should have to increase, the analysis says, would be 1.6 cents per day — 0.3 percent of the average daily electric bill.

"The annual operating costs are small relative to TVA's operating budget and revenues, and TVA should be able to implement any of the options easily with no noticeable impact on the customer," the state document says.

Brooks said it's too early to speculate how the utility might cover cleanup costs, but almost all the utility's expenses are covered through rates.