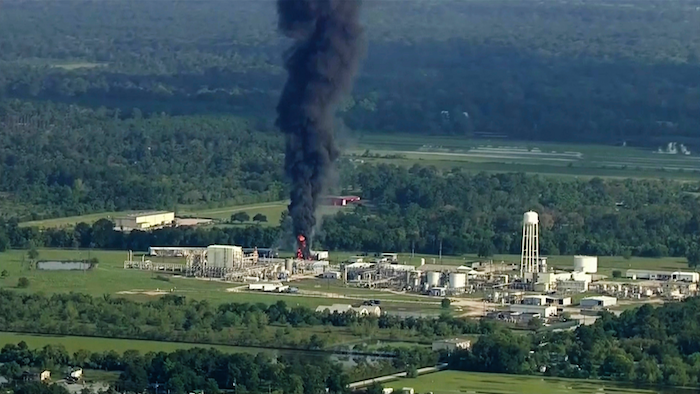 In this Sept. 1, 2017, file photo, smoke rises from the Arkema Inc. owned chemical plant in Crosby, near Houston, Texas. Federal investigators say they've seen no signs that the Houston-area plant that flooded and partially exploded during Hurricane Harvey considered moving its highly unstable compounds offsite as a precaution.
KTRK via AP, File

Much of Arkema Inc.'s facility in Crosby, just outside Houston, was placed into the 100-year flood plain in 2007. But its emergency response plan, revised as recently as 2016, offers little direction for containing flood waters.

A copy of the plan reviewed by the Associated Press says simply that "care shall be taken to be sure water is kept out" of buildings. A log Arkema kept of workers' efforts to safeguard the plant didn't mention relocating its organic peroxides, which are used in a range of products from plastics to paints.

The company did not answer questions Wednesday about whether it discussed or tried moving the chemicals.

"The facility was not prepared for such heavy rainfall," U.S. Chemical Safety Board Chairwoman Vanessa Allen Sutherland said during a news conference Wednesday. She mentioned relocating chemicals as a safety measure companies might use.

The news conference was intended as an update on the board's Arkema investigation, which Sutherland said would be completed around June when the next hurricane season begins.

The safety board is one of several federal, state and local agencies investigating. Arkema, along with its France-based parent company, also faces lawsuits from first responders and residents who say they were sickened after being exposed to toxic substances released in the fire and explosions.

Arkema officials have insisted that they planned as best they could and couldn't have anticipated such unprecedented rainfall, based in part on their experience with other hurricanes and storms that slammed Texas' Gulf Coast.

The National Hurricane Center warned two days before the plant was flooded out that spots around Houston could get about 50 inches (130 centimeters).

"Our Crosby site has never had flooding anywhere like what we saw in Harvey, since we purchased the property in 1960," Arkema spokeswoman Janet Smith said Wednesday. "Even during Tropical Storm Alison, which caused severe flooding in Houston, we were able to drive trucks around our Crosby plant."

Sutherland and the board's lead investigator, Mark Wingard, said the agency was still reviewing several facets of the incident, such as how well Arkema warned the public about the smoke's health risks. Neither sharply criticized the company during the news conference.

The lesson from Harvey may be that manufacturers like Arkema can no longer look to the past when planning for accidents, they said. Changes in the frequency and severity of storms may mean that government flood maps or companies' worst-case scenarios are out of date.

"No one has a crystal ball," Sutherland said, "but we don't people to be lulled into a false sense of thinking that the plan they have today — that they may have done a year or two or three years ago — is still going to be adequate."

The safety board will make recommendations as part of its work to companies and regulators. Wingard noted, for example, there wasn't a rule on how high back-up generators should be kept and industry practice may have been inadequate.

Sutherland and Wingard said the agency is studying other industry standards, including the protection of power systems during storms and controlling rising waters inside flood plains.

In the last decade, state and federal regulators have penalized Arkema's Crosby plant multiple times. Arkema failed in June 2006 to prevent unauthorized emissions during a two-hour warehouse fire. In February, the U.S. Occupational Safety and Health Administration fined Arkema more than $90,000 for of 10 serious safety violations found during an inspection.

An analysis led by Texas A&M University researchers in 2016 identified Arkema's facility as one of the biggest risks in a corridor with the country's greatest concentration of petrochemical plants.