Dealers deliver vehicles to customers for test drives and allow people to do paperwork online. 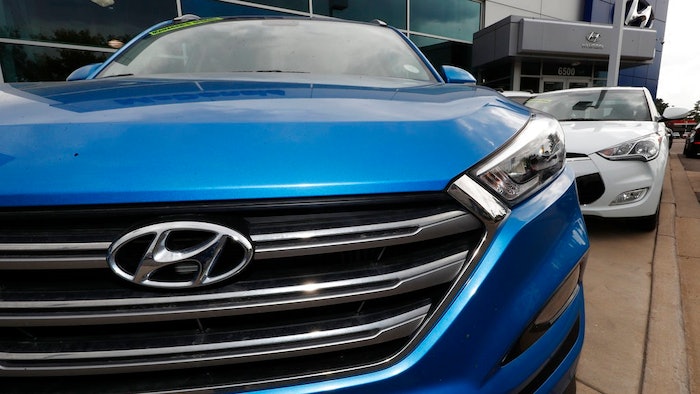 In this Friday, Oct. 6, 2017, photo, a 2017 Santa Fe sports utility vehicle sits outside a Hyundai dealership in the south Denver suburb of Littleton, Colo. Battered by dramatically falling sales for the past five years, Hyundai is training its dealers to make the car-buying experience easier for consumers.
AP Photo/David Zalubowski

DETROIT (AP) — Stung by falling U.S. sales, Hyundai is pushing its dealers to modernize the new-car shopping experience, conceding that customers are well-armed with information from the internet before they step on the showroom floor.

The Korean automaker on Tuesday announced that dealers will post "fair market pricing" on their websites that includes company discounts offered to consumers. Dealers, which are independent businesses, will be encouraged to add incentives they're offering to buyers. They'll also deliver vehicles to customers for test drives and allow people to do paperwork online, including calculation of monthly payments, loan applications and estimating the value of their trade-ins.

"They would rather spend less time negotiating, filling out forms and re-filling out forms for the second time," Dean Evans, the company's chief marketing officer in the U.S., said of car shoppers. "But they do want to spend more time getting to know the car and the features of the car."

Hyundai Motor Co. hopes the move will boost U.S. sales, which are down almost 13 percent so far this year, a far bigger drop than the overall market's decline of just under 2 percent. The company's U.S. sales have outpaced the market in only one of the previous five years, according to Autodata Corp. The decline is weighing on the Korean automaker's earnings. In the second quarter, profits were halved from a year ago to the lowest level since 2010 on falling sales in the U.S. and China.

To a large degree, Hyundai relied too much on car sales and didn't have enough SUV models as American buyers shifted dramatically away from cars. About 16 percent of Hyundai's global sales come from the U.S.

Before going to a dealership, buyers already know about incentives and what others are paying for vehicles from websites like Edmunds.com, TrueCar.com and Kbb.com, Evans said. Dealers will be encouraged to match average sale prices shown on those websites, Evans said.

The program, named "Shopper Assurance," will start in Miami, Orlando, Dallas and Houston and is expected to go nationwide early next year. Most of the company's dealers are expected to participate, Hyundai said. Even with the market pricing, buyers can still negotiate.

"We've listened to our customers and they want convenience and simplicity," said Andrew DiFeo, chairman of the company's U.S. dealership council who runs a dealership near Jacksonville, Florida.

Auto buyer surveys by Cox Automotive, which owns Kelley Blue Book and Autotrader.com, show that satisfaction with the new-car buying process is falling, with only 76 percent of customers satisfied with their experience. Only 51 percent were happy with how long the process took.

Moves by Hyundai to eliminate price uncertainty and haggling and to cut the time inside dealerships should help the company, she said.

No-haggle pricing has been tried before and failed to attract huge numbers of buyers, most notably by the now-defunct General Motors Saturn brand several decades ago. But the popularity of third-party pricing services and millennials who don't want to bargain are changing the process, Lindland said.

"I think there's opportunity to fundamentally change the car-buying experience, both in person and online," she said.