The unwholesome fatberg is made up of congealed wet wipes, diapers, fat and oil.

Associated Press
A Fatberg covers an 1852-built sewer at Westminster in in London, Monday, Sept. 25, 2017. British engineers are studying ways to dispose of yet another oversize “fatberg” threatening London’s sewers. Stuart White of Thames Water says the latest fat blob is located in a busy area beneath Chinatown near London’s famed Leicester Square.
AP Photo/Frank Augstein

Stuart White of Thames Water says the latest fat blob is located in a busy area beneath Chinatown near London's famed Leicester Square.

He said Monday it's not causing problems yet but must somehow be broken up and removed from the sewer, which was built in 1852.

The unwholesome fatberg is made up of congealed wet wipes, diapers, fat, oil and other detritus.

The disconcerting find comes two weeks after Thames Water reported finding a fatberg that was 250 yards long and weighed as much as 11 double-decker buses.

The company is using high-powered jet hoses to try to break up that fatberg so it can be sucked out into tankers for disposal. 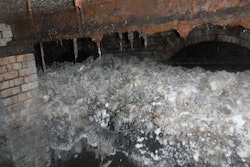 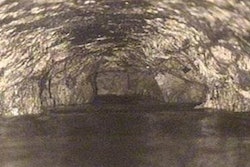