An employee of the press office for the company headquarters said, "Yes, we are interested in Jeep." 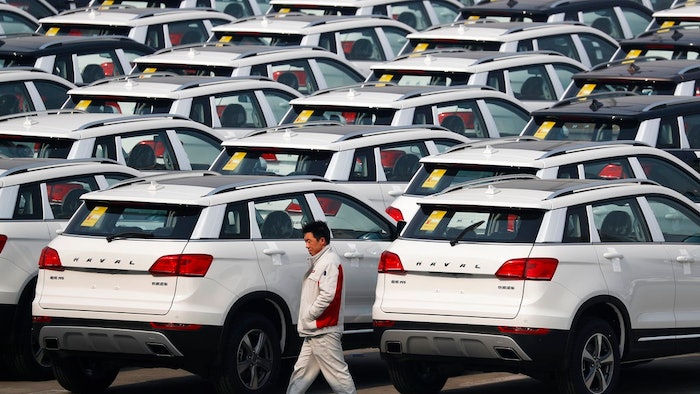 In this Feb. 19, 2017, file photo, a worker walks past Haval SUV models parked outside the Great Wall Motors assembly plant in Baoding in north China's Hebei province. Chinese SUV maker Great Wall Motors is considering making a bid to acquire Fiat Chrysler's Jeep unit, two employees of the Chinese company said Monday, Aug. 21, 2017 in an ambitious new move for the country's fast-growing domestic auto brands. Great Wall has yet to make a formal announcement of its interest in Jeep but a possible acquisition would be in line with chairman Wang Jianjun's goal, announced in February, of becoming the top specialty SUV producer by 2020.
AP Photo/Andy Wong, File

Great Wall has yet to formally declare its interest in Jeep, but a possible acquisition would be in line with chairman Wang Jianjun's goal, announced in February, of becoming the top specialty SUV producer by 2020.

Great Wall "has this intention," said the public relations director for its Haval SUV brand, Zhao Lijia, when asked about a report by Automotive News that the Chinese automaker wants to buy Jeep. An employee of the press office for the company headquarters, who would give only his surname, Zhang, said, "Yes, we are interested in Jeep."

Zhao and Zhang said they had no other details when asked about a possible price. Zhao said it may take some time to assemble a formal bid.

Fiat Chrysler CEO Sergio Marchionne has said the company is for sale and cannot compete globally without a tie-up to a bigger partner due to the high costs of developing and marketing vehicles.

In a statement Monday, Fiat Chrysler Automobiles NV said it had not been approached by Great Wall.

Marchionne said in April that Jeep and Chrysler's Ram truck brand are strong enough to stand alone. The company spun off its Ferrari brand in 2015 into a separate business.

Chinese companies in industries from autos to robots are spending billions of dollars to acquire brands and technology to strengthen their competitive position at home and speed their development.

Great Wall Motors Ltd., headquartered in Baoding, southwest of Beijing, is one of a series of independent Chinese automakers that have grown up alongside state-owned giants such as Shanghai Automotive Industries.

If it goes ahead with a Jeep bid, Great Wall could become the second Chinese automaker, after Geely Holding Group, to expand onto the global stage by acquiring an established foreign brand.

Geely bought Sweden's Volvo Cars from Ford Motor Co. in 2010 and has launched a third brand, Lynk & Co., as a partnership between Volvo and Geely's Chinese brand.

Great Wall also can draw on strong demand in China, the biggest auto market by units sold. Total SUV sales rose 16.8 percent over a year earlier to 4.5 million in the six months ending in June.

Great Wall emerged from a collective founded in the 1980s to repair and customize vehicles. Wei, then 26, took control in 1990 and shifted into auto manufacturing. The company launched its first sedan in 1993 but narrowed its focus a decade ago to SUVs.

Wei said in February that the company's "globalization strategy" included improving technology to meet U.S. safety standards. But he gave no indication when Haval might export to the United States or major European markets such as Germany.

Jeep Hackers Back With Scarier Method