From Bernie Sanders to Danny Glover, big name union supporters are getting into the discussion at Nissan's Canton, MS plant. 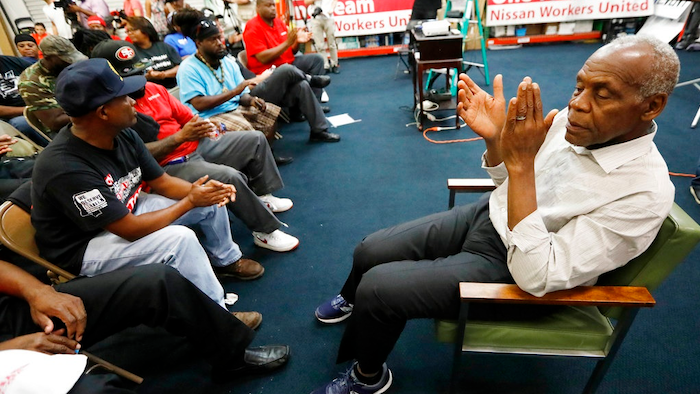 Actor and human rights activist Danny Glover, applauds with UAW members and Nissan employees at the UAW Canton, Miss., headquarters during a workers' rally, near the Nissan vehicle assembly plant, Tuesday, Aug. 1, 2017. Glover participated in the small rally to maintain workers' morale, while UAW workers set up an informational line outside employee entrances at the Nissan plant. The UAW has a vote scheduled Aug. 3-4, on whether it should represent the 3,700 full time company workers.
AP Photo/Rogelio V. Solis

CANTON, Miss. (AP) — High profile backers of a union at Nissan's Mississippi plant are renewing their support for the United Auto Workers.

U.S. Sen. Bernie Sanders and Democratic National Committee Chairman Tom Perez addressed UAW supporters by videoconference Tuesday, two days before 3,700 workers begin voting on whether the UAW should represent them. Actor Danny Glover, a UAW supporter for years, traveled to Canton to meet with more than 50 workers at a UAW office.

Union supporters and opponents are battling over the vote, which ends Friday at one of three American plants owned by Japanese-based Nissan Motor Co. Management opposes the union, saying that it would hurt the plant's economic competitiveness.

Mississippi Gov. Phil Bryant and other Republicans have lambasted the support of Sanders, a Vermont independent and former Democratic presidential candidate.

Eighty-seven percent of the panelists have identified supply chain bottlenecks as a major factor in the acceleration of prices.
Dec 6th, 2021

Manufacturing can be an exemplar of sustainability by adopting Industry 4.0 towards decarbonization and for building a circular economy.
Dec 3rd, 2021
Follow Us
Most Recent