The future USS Oregon is expected to cost about $2.7 billion and be delivered to the Navy in November 2019. 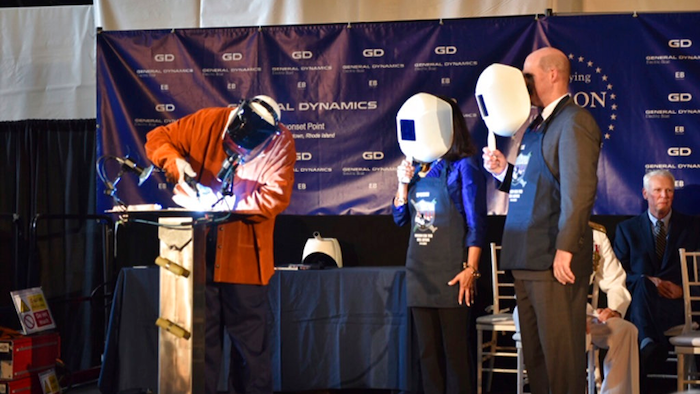 This photo provided by the US Navy shows Stephen Corr welding the outline of Dana Richardson’s initials on the Oregon keel as Dana and Electric Boat President Jeff Geiger look on Saturday July 8, 2017, in North Kingstown, R.I.
US Navy via AP

The milestone marks the ceremonial beginning of a ship's construction. Modern submarines do not have a traditional keel that runs the length of the ship because they are built in modules. Instead, at the event, the submarine's sponsor wrote her initials in chalk on a metal plate for a welder to inscribe and to be mounted on the submarine.

The future USS Oregon is expected to cost about $2.7 billion and be delivered to the Navy in November 2019.

"Oregon is going to be put to work the minute it's launched because the demand signal is at the highest level," said U.S. Rep. Joe Courtney, a Connecticut Democrat.

The keel-laying comes at a time when many in Congress and in the military are eager to get more submarines into the fleet. Groton, Connecticut-based Electric Boat and Newport News Shipbuilding in Virginia have an agreement to build two attack submarines annually.

The House and Senate Armed Services Committees have each approved bills to authorize building three submarines instead of two in some years, and also authorize additional funding to prepare for the increased work.

"It's really a robust, bipartisan recognition that submarines are the stealthiest, strongest and most survivable among most of our naval assets," said U.S. Sen. Richard Blumenthal, a Connecticut Democrat.

For centuries, U.S. Navy ships have had female sponsors who christen the vessels. It is said that the sponsor's spirit and presence guides the ship throughout its life. Public officials and wives of senior naval officers serve as sponsors for many of the ships named after places.

The Oregon's sponsor is Dana Richardson, wife of Adm. John Richardson, the chief of naval operations and a submariner. Richardson, a native of Corvallis, Oregon, said she wants to use what she's learned over 35 years as a military spouse to help sailors and their families. She said their unique way of life is rewarding, but also challenging.

"We already have a pretty big family, five kids, but I feel like now I'm gaining a bigger family," she said. "My family is expanding to include dedicated, committed sailors and their families, and I'm looking forward to being a part of their lives."

Submarine Contract Worth $43B Finds Home

The contracts under negotiation cover 14 Deere plants.
Oct 19th, 2021
Follow Us
Most Recent