Patients across the globe have filed tens of thousands of lawsuits against Johnson & Johnson and other pelvic mesh manufacturers over the devices. 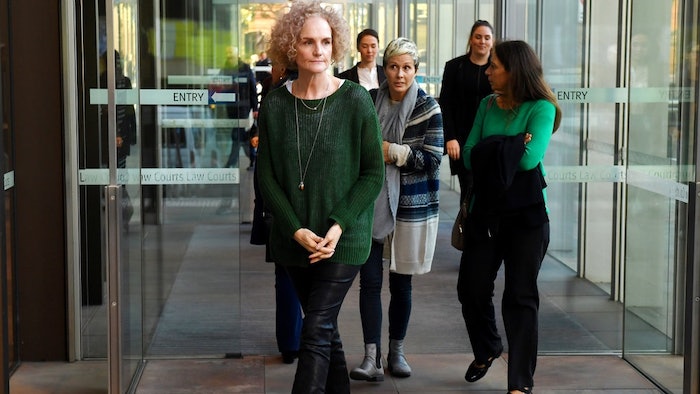 Members of the class action against Johnson & Johnson, Gai Thompson, left, Joanne Maninon, center, and Carina Anderson, right, arrive to address the media outside the Federal Court in Sydney on Tuesday, July 4, 2017. More than 700 Australian women have joined a class-action lawsuit against Johnson & Johnson over the pharmaceutical giant's vaginal mesh implants.
Paul Miller/AAP Image via AP

SYDNEY (AP) — More than 700 Australian women in a class-action case against pharmaceutical giant Johnson & Johnson that started Tuesday argued that the company's vaginal mesh implants caused them devastating pain, ravaged their bodies and, in some cases, ruined their lives.

Patients across the United States, United Kingdom and Canada have filed tens of thousands of lawsuits against Johnson & Johnson and other pelvic mesh manufacturers over the devices, which are used to treat urinary incontinence and repair pelvic organ prolapse, a condition often caused by childbirth in which organs shift out of place. Women who have sued the manufacturers say the mesh caused them chronic and often debilitating pain, infections, loss of sexual function and incontinence. In 2014, Irish medical device maker Endo International said it would pay $830 million to settle more than 20,000 personal injury lawsuits related to its vaginal mesh implants.

The Australian trial that began Tuesday is expected to last six months. The lawsuit argues the U.S.-based company was negligent for not properly warning doctors and patients about the risks associated with the devices. The lawsuit also contends that the products were not fit for the purposes for which they were designed, and the testing prior to the devices being sold was inadequate.

Gai Thompson, one of the claimants in the lawsuit, said she has suffered pain every day since she received the implant.

"No amount of compensation, money, could ever replace what we've lost with our lives, with our families, our health, our emotional health," Thompson told reporters outside court. "My prayer is that this mesh would be banned and that no woman would suffer what we suffer."

Attorney Jan Saddler of Shine Lawyers, the firm representing the women, said the major problem with the devices is that they erode into surrounding tissue and organs, causing a chronic inflammatory response. Virtually all the women involved in the lawsuit suffer chronic pain, and many have experienced relationship problems due to their inability to have sex, Saddler said.

Johnson & Johnson says it has sold over 100,000 mesh products in Australia. The lawsuit singles out nine separate devices; of those, the company has taken five off the market. None of the devices have been subject to a recall by Australian regulators. In the U.S., the Food and Drug Administration last year reclassified all pelvic mesh implants as "high risk" instead of moderate, making them subject to extra regulatory requirements. But the agency has not recalled the devices.

In a statement, Johnson & Johnson said the use of mesh to treat pelvic organ prolapse and urinary incontinence has successfully helped millions of women worldwide, and said the majority of women who undergo the surgery have had a positive result.

"These pelvic mesh products have been developed in close consultation with specialist surgeons and are backed by years of clinical research," the company said. "We have always complied fully with local regulatory requirements when providing the products in Australia, and have acted ethically and responsibly in the research, development and supply of the products."

Thompson said she wants the company to be held accountable for the suffering she and so many other women say the mesh has caused.

"For so many years, we've been told that there's nothing wrong with us, that symptoms are either in our head or it's not because of the mesh. But there are so many women who have the same complications," Thompson said. "The mesh destroys lives — it destroys you physically and emotionally."