The country has struggled to integrate wind and solar farms into an outdated electricity network dominated by coal. 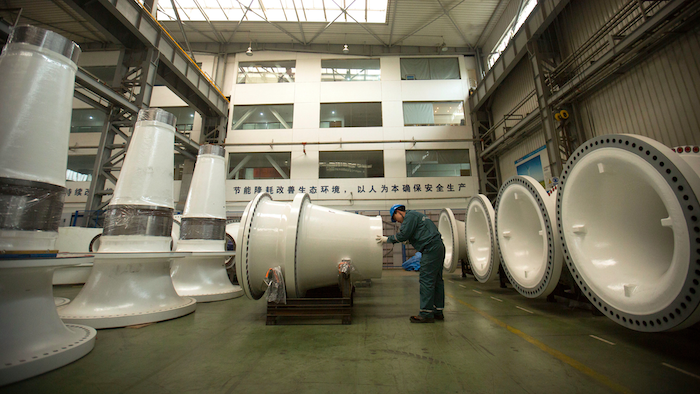 In this Nov. 9, 2015 photo, a worker inspects wind turbine parts at a Goldwind wind turbine factory in Beijing. Increasing amounts of green energy have gone unused in China as it struggles to integrate wind and solar power into a dated electricity network dominated by coal.
AP Photo/Mark Schiefelbein

BEIJING (AP) — China's scramble to curb pollution has made it the world leader in renewable energy development, yet increasing amounts of that green power have gone unused as the country struggles to integrate wind and solar farms into an outdated and balkanized electricity network dominated by coal.

The problem threatens to slow China's progress in clearing its air and controlling the greenhouse gas emissions that make it the top contributor to climate change. It also could hamper any desire among Chinese leaders to fill the leadership gap left by President Donald Trump's move to withdraw the U.S. from the Paris climate accord.

As energy ministers from around the globe gather in Beijing this week to promote renewables, China's difficulty maximizing its green resources reflects the challenges they face over how best to transition to cleaner electricity.

"They installed too much too fast," said Qiao Liming, China director for the Global Wind Energy Council. "A real market should allow electricity to flow between two provinces. That is currently lacking" in China, she said.

Thousands of new wind turbines and solar panels were installed in China's remote provinces over the past several years as the country's leaders sought to alleviate choking urban smog without slowing economic expansion. China now has more renewable power capacity than any other nation.

Two nagging problems have dampened that success, however, according to industry representatives and outside observers: China's sprawling power grid has been unable to handle the influx of new electricity from wind and solar, while some provincial officials have retained a preference for coal.

In western China's Gansu province, 43 percent of energy from wind went unused in 2016, a phenomenon known in the energy industry as "curtailment." In the neighboring Xinjiang region, the curtailment figure was 38 percent and in northeast China's Jilin province it was 30 percent. The nationwide figure, 17 percent, was described by Qiao's organization as "shockingly high" after increasing for several years in a row.

The problem has shown some signs of improvement this year, according to the China Electricity Council. Power demand in general increased in the first quarter, giving a boost to renewables after the economy regained momentum from 2016's slowdown.

However, experts say wasted energy will continue to be a drag on Chinese renewable power potential until the country's electrical grid is modernized and provincial officials end their preference for coal, which provides almost two-thirds of the country's energy.

The problem is worst in winter, when many coal plants provide electricity for the power grid and send out excess heat to keep homes and businesses warm.

That's led provincial officials to keep coal plants running — and to reject available wind-generated electricity — despite pressure from the central government to use more renewables, said Lu Xi, a professor at Tsinghua University's School of Environment in Beijing.

"On paper they express quite clear attitudes to promote renewables, but in reality they promote coal interests," said Frank Yu, a renewables specialist with the consulting firm Wood Mackenzie.

To help address the issue, China's National Energy Administration has pushed for more wind turbines to be installed closer to Beijing and coastal cities, where demand is highest. That should allow renewable energy to bypass part of the dated transmission system that's been blamed for impeding its use. It also would give more populated provinces a greater stake in making sure renewables get used.

In a separate effort, at this week's energy ministers meeting in Beijing, Chinese officials are expected to launch a campaign to make its power supply system more flexible. The goal is to create a power grid that can more easily absorb the highs and lows associated with weather-dependent wind and solar electricity, said Christian Zinglersen, the head of the Clean Energy Ministerial, which is hosting the meeting.

Still, the problem of electricity going unused could get worse before it gets better, said Liutong Zhang, a senior manager with the Lantau Group, a Hong Kong-based energy consulting firm. More solar and wind is planned in Chinese provinces that already have more power-generating capacity than they use. Additional coal plants also are slated to come online, Zhang said.

China's difficulties, while more pronounced than in other countries, are not unique. Western countries have experienced their own renewable struggles as utilities tried to integrate weather-dependent wind and solar power into electricity grids built around coal plants, which are more polluting but also more reliable.

But over the next two decades, events in developing nations including China and India are expected to play a magnified role in addressing climate change.

"Developing nations with aggressive wind and solar deployments do face and will face these same challenges," said Edward Cunningham, director of China programs at Harvard University's Kennedy School of Government.

The United States, meanwhile, appears headed for a diminished presence as Trump and fellow Republicans back away from the climate policies of former President Barack Obama.

Almost all of the increased electricity demand in coming years is expected to come from developing nations, according to projections from the International Energy Administration.

China alone will account for about half the total.

China's struggles to maximize its use of renewables won't necessarily prevent it from meeting international emissions targets that aim to keep global warming below 2 degrees Celsius compared to pre-industrial levels. But it will make it much more expensive unless China is able to adapt its power supply system while it's still in development, Zinglersen said.