Hundreds of retirees from engine plant have claimed illnesses linked to exposure to toxins inside the factory. 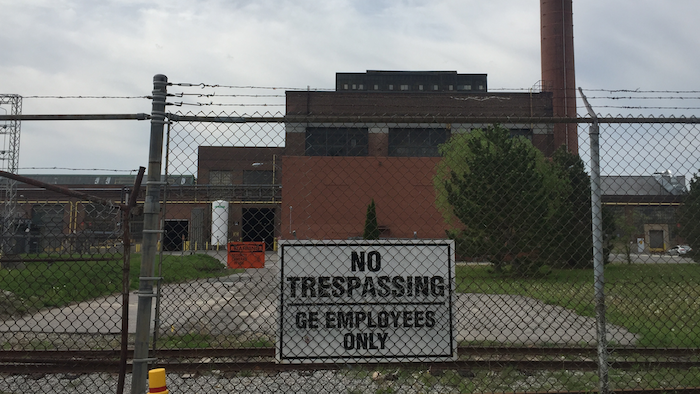 This May 24, 2017 photo shows the General Electric manufacturing facility in Peterborough, Ontario, Canada. For more than a decade, several hundred retirees from this plant, which produced engines for trains and ships among other things, have claimed illnesses linked to exposure to toxins inside the factory. Now, they may soon get the compensation they have sought from the provincial government, following Ontario Labor Minister Kevin Flynn publicly calling on the worker's compensation board to "bring justice" to about 300 former workers whose health claims were previously denied.
AP Photo/Rob Gillies

PETERBOROUGH, Ontario (AP) — Marilyn Harding cries as she talks about her late husband and his death from pancreatic cancer five years after retiring from a three-decade career at the General Electric factory in her hometown.

Harding, who spent nearly 40 years working at the plant until she retired in 2004, has also had cancer, as have many of her former colleagues.

"Once we got out of there and retired, everyone started to get sick," she said.

For more than a decade, several hundred retirees from the hulking Peterborough plant, which produced engines for trains and ships among other things, have claimed illnesses linked to exposure to toxins inside the factory. Now, they may soon get the compensation they have sought from the provincial government.

Ontario Labor Minister Kevin Flynn for the first time has publicly called on the worker's compensation board to "bring justice" to about 300 former workers whose health claims were previously denied.

"A number of people should have been treated better by the system," Flynn said afterward in an interview.

His support followed release of a lengthy report conducted by researchers hired by the union representing workers at the plant that found exposure to more than 3,000 toxic chemicals from 1945 to 2000 and significant health problems among former employees. It also came after an extensive series of reports by The Toronto Star on the range of illnesses suffered by former workers.

GE spokeswoman Kim Warburton said it is cooperating with the worker's compensation board, the agency that evaluates and pays claims.

The company has not conceded that any illnesses were caused by working at the plant and says chemicals were used in what were believed to be safe ways at the time.

"As more information became available about chemical use, GE, like other industrial companies, took action to reduce or eliminate their usage," Warburton said. "GE adhered to the health and safety practices that were appropriate for the time, and we have continually enhanced those practices as scientific research and best practices in industrial health and safety emerged."

Workers in Ontario cannot sue their employers for workplace injuries and illness and must go through the board to seek compensation. Employers pay insurance premiums for injuries and illness. It's a less litigious system than in the U.S., but the GE retirees say the system isn't working.

Generations of Peterborough families worked in the 125-year-old GE plant. Founded by Thomas Edison, it was the city's biggest employer and one of the Canada's largest factories, with more than 6,500 workers during the 1960s.

It now has just 440 employees producing large motors for the mining and oil industries. Peterborough, a city of about 123,000 people 90 miles northeast of Toronto, seems these days more like a retirement community than a major manufacturing hub, with the hospital and a university the biggest employers.

Harding started working at the plant in 1965 and did a number of jobs. A denial letter from Workplace Safety and Insurance Board stipulates she didn't have enough exposure time to asbestos to qualify for compensation for her bladder cancer.

Harding, 71, lives alone in a house filled with family photos. Her husband loved doing yard work and she vows to keep it up. Her father also worked at the GE plant.

Roger Fowler was diagnosed with colorectal cancer at 45. He had his rectum removed. Surgeons created an opening, a stoma, on the abdomen, so he could pass stool. Fowler, 71, has had numerous surgeries since. "It physically ruined me," he said.

Fowler also blames his cancer on asbestos. The compensation board denied him because they found he didn't have enough exposure. But he is more optimistic now that Flynn is publicly supporting the retirees.

"We are the Erin Brockovich of Peterborough," Fowler said, referring to the U.S. legal clerk and activist whose role in a water pollution case became the subject of a movie starring Julia Roberts.

Jeff Leal, the provincial lawmaker for Peterborough, said his father worked as a machinist at GE for 40 years and died of lung cancer less than a year after retiring. His dad, who was a smoker, didn't file a claim. He doesn't fault GE but he wants fairness for his community.

"It's been a long road," Leal said. "Gosh. It's personal and emotional. I remember someone came in and visited me in my constituency office in Peterborough and two weeks later they were dead."

Dr. Paul Demers, director of the Toronto-based Occupational Cancer Research Centre, finds the work-related claims of cancer credible and says requiring scientific certainty is tough. "We have a system of compensation that can often feel adversarial," he said.

Christine Arnott, a spokeswoman for the compensation board, said officials rely on the best scientific evidence available as well as information about a worker's illness, workplace exposures and relevant non-occupational factors. She said they welcome the new report and will consider it as they review claims.

Harding wants all the claims looked at again. She doesn't know how much compensation she might get. She just wants justice, noting people continue to die.

"We just had another man die on the weekend," Harding said.

There's a Lot of Reasons October Could Be Terrifying