A welcome mat has been put out for construction trades, as well as auto, steel and coal workers, but there's been no invitation for the shrinking pool of collective bargainers. 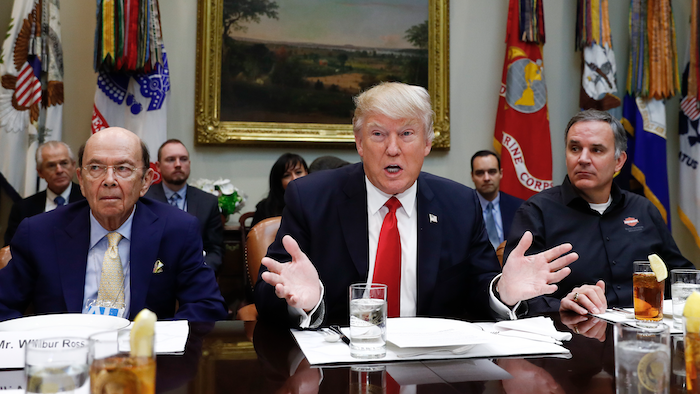 WASHINGTON (AP) — President Donald Trump says labor unions have an open door to his White House, but so far, he's holding the door a little more ajar for some organizations than others.

Trump has put out the welcome mat for the nation's construction trades, with whom he's had relationships during decades of building office towers and hotels. Also invited in have been auto, steel and coal workers who backed him during the 2016 election.

But there's been no White House invitation for other unions representing the sprawling but shrinking pool of 14.6 million workers who collectively bargain with employers in the labor movement.

"You can tell Congress that America's building trades and its president are very much united," Trump told North America's Building Trade Unions, even as he pledged in the same speech, "America's labor leaders will always find an open door with Donald Trump."

But he has not courted all union leaders or advocated for all labor priorities. For example, he's against a $15-an-hour minimum wage and has let linger a rule expanding overtime pay. Much like President Ronald Reagan did, Trump is not so much pursuing a labor agenda but one that appeals to those who share his "Buy American, Hire American" priorities and happen to be union members.

"Trump is clearly working to be the blue collar president," said F. Vincent Vernuccio, director of labor policy at the center-right nonprofit Mackinac Center for Public Policy in Michigan. "He's trying to bring back the Reagan labor coalition and get the Blue Dog Democrats back."

The White House says the president is "open to meeting with various individuals and groups on how to improve the lives of all Americans." But even among unions with most-favored status, there's some skepticism about whether he's for workers or just the executives who hire them.

Trump got some boos and hisses during his address to the building trades union. And Chuck Jones, president of United Steelworkers Local 1999, with whom Trump feuded, raises an eyebrow at the talk coming from the White House.

"I don't think from our perspective, he's a friend of the working class person," Jones said, noting that Trump's tax plan would benefit the president himself, and that Trump campaigned on "getting rid" of a long-standing free trade deal with Canada and Mexico. "Trump always had some kind of relationship with the building trades. But for regular manufacturing? This is not a good time for working people."

The 2016 election suggests labor is fertile political ground for Trump. Exit polls showed he pulled within eight percentage points of Democrat Hillary Clinton among union members — the closest margin for any GOP nominee since Reagan in 1984.

During his first 100 days, Trump has tried to appeal to those frustrated by seeing U.S. jobs go overseas. For example, he scrapped U.S. plans to participate in an Asia-Pacific trade pact and belittled the North American Free Trade Agreement, although he backed away from a campaign pledge to withdraw from it.

He's taken to Twitter to criticize American companies with plans to move some operations to other countries and threatened to tax any products they tried to sell in the U.S. He's pushed a reluctant Republican-controlled Congress to pay for a $1 trillion rebuilding of the nation's roads and bridges, and he's green-lighted the Keystone XL pipeline.

But while some unions have received the red carpet treatment, others have been largely ignored at the White House.

Take teachers unions, traditional allies of Democrats. While Education Secretary Betsy DeVos joined Trump for White House sessions with teachers and other educators, neither of the two big teachers unions — the National Education Association and the American Federation of Teachers — was invited. DeVos did accept an invitation from AFT President Randi Weingarten to tour a school in Ohio.

"Trump in New York was never involved in education. He was a blank slate on education," Weingarten said.

"The big test for him even on infrastructure is: Is he going to stop the Republicans in Congress from trying to take out the protections for prevailing wage," she said. "Is he actually going to have enough money in there for projects?"

Trump is picking and choosing among labor unions at a vulnerable time for the movement in American politics. Union membership declined 240,000 in one year to 10.7 percent of the workforce in 2016, about half as much as when the Census Bureau began collecting such statistics in 1983.

"There are some unions that, in fact, he has gone after. Teachers come to mind. Government employees come to mind," said the AFL-CIO's Richard Trumka, referring to the president's pledges to close or slash spending for the Department of Education and efforts to shrink the federal workforce.

Trump is starting with what he knows, and where labor is concerned, that means building trades go to the top of the list.

"Did you ever think you'd see a president who knows how much concrete and rebar you can lay down in a single day?" he said at their conference last month. "We're a nation of builders, and it was about time we had a builder in the White House."

This president, said Gary N. Chaison, a labor historian at Clark University, "knows very well from his old days working in the hotel industry in Manhattan that it's important to get along with the construction unions."