Up to 50 people are believed to be trapped in the mine. 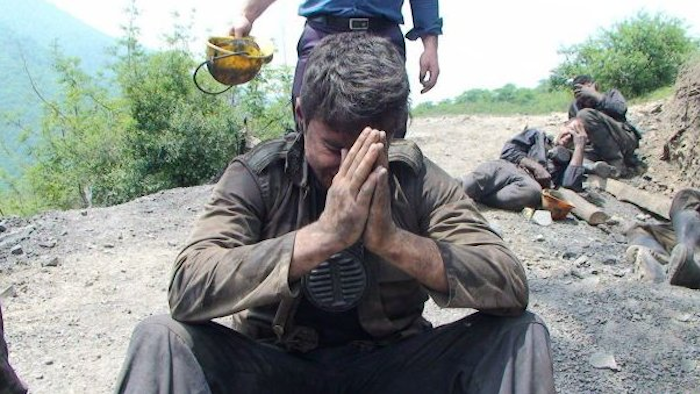 At least 25 people who had entered the mine to try to save those trapped had to be taken to the hospital after inhaling the gas.
@MiddleEastEye, Twitter

Ambulances, helicopters and other rescue vehicles raced to the scene in Iran's northern Golestan province as authorities worked to determine the scale of the emergency.

The IRNA news agency quoted Golestan provincial emergency management department head Sadeq Ali Moghadam as saying that 40 to 50 people are believed to be trapped in the mine outside of the town of Azadshahr.

Pir Hossein Kolivand, who runs Iran's emergency department, later said that as many as 80 miners could be trapped in two sections of the mine. The different figures could not immediately be reconciled.

Provincial spokesman Ali Yazerloo said the blast happened at 12:45 p.m. local time (0945 GMT) and that the provincial governor was heading to the scene. Several officials blamed the explosion on accumulated gas and said it was affecting rescue efforts.

At least 25 people who had entered the mine to try to save those trapped had to be taken to the hospital after inhaling the gas, said Hamidreza Montazeri, the deputy head of the emergency management department in Golestan.

"I carried two out of the mine," an unidentified, soot-covered miner told state television. "It is not possible to go inside again. Oxygen tanks should be brought."

Another miner said he feared his colleagues trapped inside may have died.

"The gas in the mine exploded and my colleagues remained in the tunnel," he said.

Semi-official Iranian news agencies posted images online from the scene, showing ambulances and emergency workers gathered at the mouth of the mine. Some showed dazed workers, covered in coal dust, being helped by bystanders or laying on the ground as rescuers rushed past with oxygen bottles.

More than 500 workers are employed at the Zemestanyurt mine, which lies 14 kilometers (9 miles) from Azadshahr, according to IRNA. Golestan sits along Iran's northern border with Turkmenistan and along the shore of the Caspian Sea.

Oil-producing Iran is also rich in a variety of minerals. Iran annually consumes some 2.5 ton of coal but only extracts about 1 million tons from its mines per year. The rest is imported, often consumed in the country's steel mills.

Since Iran's nuclear deal with world powers, the country has begun an effort to renovate some of its coal mines. Delegations have visited Tehran from foreign countries including the Czech Republic, hopeful for contracts.

Update: Mine Explosion Has Killed At Least 35